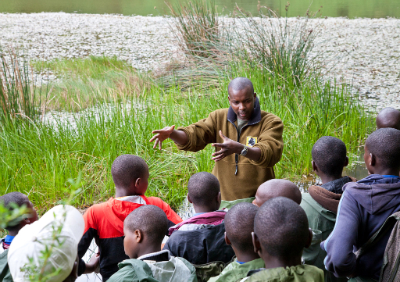 I had the great pleasure recently of taking 80 local fifth grade students on a guided tour of the forest in Volcanoes National Park. Because of their age I couldn't take them to see the gorillas, but they saw the vegetation in the park, learned what gorillas eat, saw other animals or their droppings, and visited Lake Ngezi inside the park, among other things. The park guides helped conduct the tour.

The students came from four primary schools that participated in the Disney-designed conservation lessons that we delivered in six schools in September 2011 (an increase from four schools last year). They were selected based on their score on term exams, which also motivates them to do well in school. 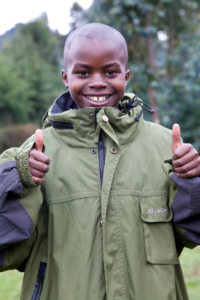 An article in New Times, Rwanda's only English language daily newspaper, quoted Prosper Uwingeri, the park's warden and a former Karisoke Research Center staff member, as saying "An enlightened generation will not only depend less on park resources such as wild meat, but also help fight illegal harvesting of park resources."