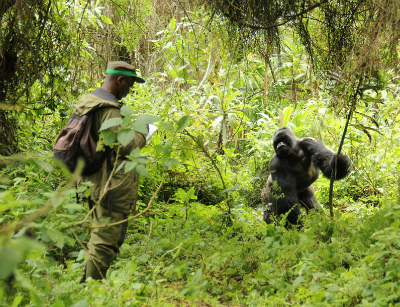 The mountain gorilla population in the Virungas has almost doubled since Dian Fossey's time, when the population dropped to its lowest point of approximately 250 individuals. Today, there are 480 mountain gorillas living in the Virunga massif and the Fossey Fund monitors about 25 percent of these individuals living in 11 different family groups, though of these only nine can be monitored daily. This kind of population growth represents tremendous conservation success and the remarkable endurance of an extremely threatened species, but success presents challenges too. Perhaps the biggest challenge is faced by the Fossey Fund's core programs, our protection and monitoring teams, to continue providing the level of support necessary to maintain more gorilla groups.

One of the goals of our scientific studies is to understand how to best conserve gorillas and to use scientific knowledge to guide our protection and monitoring activities. In 2011, we were part of a team of researchers who looked at what factors are responsible for the increase in the mountain gorilla population. Combining the Fossey Fund's long-term data with information collected in other areas of the mountain gorilla habitat, we were able to show that daily monitoring of individual gorillas and the provision of veterinary care are the two key factors behind the success. Because these factors are over and beyond regular law enforcement activities seen in most national parks throughout the world, we dubbed them "extreme conservation measures."

The Fossey Fund has been one of the pioneers of extreme conservation efforts since Dian Fossey established the Karisoke Research Center in 1967 and began hiring rangers to conduct regular patrols of Volcanoes National Park. Later, she established the Digit Fund, which was renamed the Dian Fossey Gorilla Fund International after her death, to continue Fossey's research and protection activities. Having endured war, instability, and even natural disaster in the countries where we work, more than 45 years later, the Fossey Fund is still committed to the protection and monitoring programs that were at the core of Fossey's mission when she established the Digit Fund. We send teams of trackers into the park every day to make sure that each of the 120 gorillas in the groups the Fund monitors is healthy and safe. The Fossey Fund also works in close partnership with veterinarians on the park management staff and with the Gorilla Doctors, playing the vital roles of alerting park authorities when gorillas have injuries and illnesses, helping to coordinate veterinary interventions, and providing the support of our highly trained field staff to manage the gorillas during the interventions. 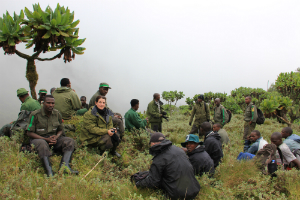 The success that the basic premise of our work — a daily presence in the forest — has brought is also accompanied by challenges. For example, the challenges the Fossey Fund has encountered in recent years are the larger geographic spread of the gorillas, who are moving to new areas of the park as the number of animals and family groups increase, which means that there is more area to cover during anti-poaching patrols; gorillas leaving the park and feeding on local crop trees, requiring round-the-clock monitoring and sometimes herding the gorillas back into the park; and changing demographics that have resulted in higher levels of infanticide.

Since 2007, the number of groups monitored by Fossey Fund staff has tripled from three to nine groups. Each time a new gorilla group forms from the individual gorillas we monitor, the Fossey Fund responds by creating a new team of trackers designated to monitor and protect the new group. These increases require a corresponding increase in staffing. Tara Stoinski, Ph.D., the Fossey Fund's chief scientist and vice president, explains, "We've been able to increase our protection and monitoring staff to provide protection to the new groups that have formed. But if anything surprising happens that requires extra manpower — for example, a gorilla goes missing from a group — our anti-poaching team gets pulled in to help, and then they can't do anti-poaching patrols. There are no spare bodies in the field." The Fossey Fund occasionally hires temporary staff to help with searches for missing gorillas or to protect groups that range outside of the park. These staff fulfill important protection activities but do not have the skills and training to help us gather all the various types of data that feed into our long-term monitoring programs.

Science has always guided the protection and monitoring activities carried out by the Fossey Fund. In addition to the staffing needs of these programs, scientists have also been challenged to understand and anticipate what impact the growing gorilla population and their changing demographics will have on their own success. For example, the group splits resulted in the Karisoke population shifting from a few large groups with several silverbacks to smaller groups with fewer and sometimes only one silverback. At the same time, weíve also seen more incidents of infanticide. This is because it is harder for silverbacks to protect the infants in their group from strange silverbacks without the support of other males. 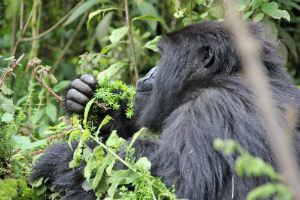 We are also concerned about the impact that a growing population might have on its habitat. The Fossey Fund recently teamed up with the Max Planck Institute for Evolutionary Anthropology to examine vegetation change in the Karisoke area of the park. Comparing vegetation patterns now with those collected 25 years ago, we showed that gallium, which is the mountain gorillas' preferred food item, has declined in biomass by 50 percent over this time period. Stoinski remarks, "With more animals using the forest, we're beginning to wonder: will the gorillas eventually eat themselves out of house and home?" We are now implementing regular vegetation monitoring programs to further understand changes in food availability.

Scientific research, like the vegetation monitoring programs, that can guide protection and monitoring and anticipate new threats to the population rely on long-term staying power — and long-term records. Fortunately, the Fossey Fund is well-positioned to implement these programs, with data about gorillas and their habitat that dates back to Dian Fossey's first years at Karisoke, and 46 years of experience working with mountain gorillas in Volcanoes National Park. 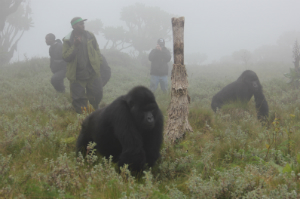 While the population growth is cause for celebration, the fact remains that there are still only about 900 mountain gorillas left on the whole planet. A population this small could easily be decimated by a single disaster, like an outbreak of respiratory illness, for example, to which mountain gorillas are highly susceptible. Stoinski says, "It's a great position to be in that the population is increasing. But we know that they are increasing because of the level of protection and monitoring they are receiving." If protection and monitoring resources were cut back, would we see this population begin to decline again?

Stoinski says that during the same time that the gorillas have doubled, the human population in Rwanda has increased by over 300 percent. The forest is under pressure from this growing human population, who use it for water, firewood, meat, and other essentials. This demands that the Fossey Fund and its partners in mountain gorilla conservation remain ever more vigilant in reaching out to communities through education and development projects that can help them find alternatives to using the forest, providing regular monitoring and protection patrols, and supporting local law enforcement within the park. Without these concerted efforts to help the mountain gorillas endure and maintain their success, we could find ourselves sliding back again quickly to square one.