The life of elderly gorilla Poppy

Mountain gorilla Poppy reached her 40th birthday this April and is the oldest of all the gorillas monitored by the Dian Fossey Gorilla Fund. She is also one of the few remaining gorillas who was known to Dian Fossey. Fossey recorded Poppy’s birth (April 1, 1976) and filled her journals with details about the playful infant. 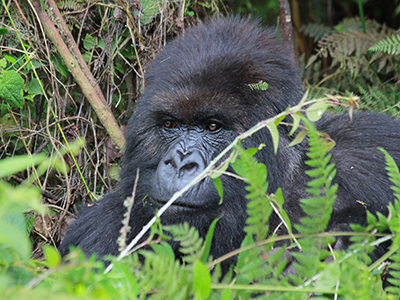 Poppy was born in a group of gorillas studied by Dian Fossey and stayed in that group until November 1985, just a few weeks before Fossey was killed. In her new group (called Susa group), Poppy quickly rose in status among the females, reaching the top level of dominance and giving birth to several infants. She stayed in this group for many years, as it grew very large, but in 2009 the group started to split and Poppy moved with two of its offshoots though eventually returned to the main Susa group.

During these years, Poppy was not monitored by Fossey Fund trackers, since her group was among those monitored instead by the Rwanda park authorities. But, in July 2015, following a stressful series of events in her group, she appeared in one of the groups we do monitor, and our field staff were delighted to see her.

Joining a new and unusual group

The group she joined is led by silverback Iyambere, and is one of the groups currently monitored by the Fossey Fund. It’s a small group of only five members, formed in 2015 by silverback Iyambere when he was only 14 years old, a very young age for a male to form a group. Oddly, two of his three females – Poppy and 38-year-old Izuru – are the oldest females we monitor!

It’s also interesting to note that both of the older females gave birth this year, though Poppy’s infant appeared to be stillborn or died shortly after delivery. Izuru’s infant, born in February, is doing well and sets a record for the oldest mother with a surviving infant. And Poppy is doing well, despite the recent loss, eating abundantly to make up for the energy used during the pregnancy and delivery.

Luckily, Poppy has a number of other thriving offspring of various ages, some of whom are still followed, either by the Fossey Fund or by park authorities, in a variety of other groups.

Poppy hails from an historic matriarchal line of gorillas named for her mother, Effie. Effie’s descendants are now spread out in many groups within the Virunga mountains and are known for some common traits, including dominant personalities and facial similarities. Poppy’s younger sister Maggie was also followed throughout her life, first by Dian Fossey and then by the Fossey Fund. However, she disappeared from our tracking region in 2015 at age 35, and has not been seen since, making Poppy the last of Effie’s surviving offspring.