The moves and transfers of an unusual female gorilla

Twenty-nine-year-old Nzeli is one of the mountain gorillas monitored regularly by the Fossey Fund trackers, but unlike other gorillas, she is not always where we expect to find her! On Aug. 16, after spending two weeks by herself (which is quite unusual), she then transferred from Bwenge’s group to Isabukuru’s group, two of the groups we follow daily. Then, on Sept. 8, she gave birth but the infant did not survive the day. (Cause of death is unknown.) 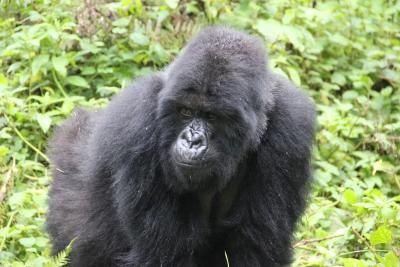 Nzeli has always surprised our trackers with atypical behaviors, moving in and out of groups, or joining a solitary male or other group for just a few days. Her last move did not have a clear immediate or social advantage, as she left a stable group while in the late stages of pregnancy.

Nzeli was born in Susa group in 1985, transferred to Pablo group in 1995, and then to Bwenge group in 2007. During her time in Bwenge group, she left and rejoined the group four times, but just for short periods. But in July, Bwenge’s group faced a challenging series of interactions with another group and with solitary males, and that’s when Nzeli left. While expecting her to rejoin Bwenge, we were instead surprised to see her moving into Isabukuru’s group. She quickly integrated there and formed a strong bond with female Nyandwi and silverback Kubaha, her old acquaintances from Pablo’s group.

Nzeli is the mother of two living gorillas – one adult female in Kuryama’s group and one juvenile in Bwenge’s group. She has lost four infants.

Now Nzeli is in Isabukuru’s group together with 15 other gorillas. Isabukuru’s is one of the most successful groups monitored by the Fossey Fund in terms of the number of females who have transferred in. Including Nzeli, seven females have joined this group in recent years.