The story of a unique mountain gorilla female: Maggie 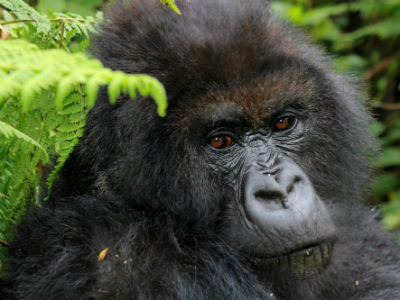 Female mountain gorilla "Maggie" was born on June 15, 1980, in Group 5, which was one of the gorilla groups first studied by Dr. Dian Fossey. Maggie's mother, Effie, was the head of the largest matrilineal family known to researchers. Effie's family was unique and included many top-ranking gorillas, males and females alike. Effie's daughters in particular have all become dominant females in the respective groups.

In 1992, Group 5 split into two groups: Pablo’s group and Shinda’s group. Maggie went with Pablo’s group, where she stayed for many years. While in Pablo’s group, she gave birth seven times, but four of the infants died.

In January 2007, Maggie left to join the recently formed group led by young silverback Bwenge. She was 27 at the time and left her three living offspring behind in Pablo’s group. While in Bwenge’s group she gave birth three times, but only one of them survived. That one was her latest, son Gasore, born Jan. 19, 2010.

In Bwenge’s group, Maggie soon became the top-ranking female and the right-hand cohort of dominant silverback Bwenge. She played a key role in the group’s cohesiveness and protection. During interactions with outsider gorillas, she would keep the group together, while silverback Bwenge took on the direct confrontation with the outsider. Maggie’s special role gained her a lot of respect from the gorillas in her group, and Fossey Fund staff have always viewed her as a special gorilla as well!

Taking on a leadership role

Maggie’s strong bond with the other gorillas became even clearer during the events that followed the sudden death of dominant Bwenge on Oct. 1, 2014, after he received severe injuries caused during an interaction with a solitary silverback.

Bwenge was the only adult male of the group, and so the remnants of the group were left without a strong leader. But Maggie took on this role. She was 34 at the time, an age that for a wild gorilla is close to the estimated life expectancy of 35. Despite her old age, she demonstrated an incredible strength.

The small group (seven gorillas) led by Maggie then went through four interactions ─ two with another group and two with solitary males ─ but they all ended with Maggie avoiding the conflict and leading her group away. During some of these events, Fossey Fund trackers saw Maggie charging and screaming at the intruding silverbacks, supported by all her group members at her side. However, the other female in the group (Faida) left Maggie and her infant Susuruka to join a lone silverback. And, despite Maggie’s strength, the group seemed stressed, constantly gathered closely around her.

Merging with another group

On Oct. 29, 2014, silverback Wageni (from Ugenda’s group) joined the remnants of Bwenge’s group and slowly guided them to merge with Ugenda’s group. It seemed to be a good time for Bwenge’s remnants to join another group and to benefit from the physical protection of a silverback.

Maggie may have joined Ugenda because he is a particularly peaceful silverback. In many ways, he is more similar to Bwenge than the other silverbacks she met when they were alone. She may feel safer in this group. An interesting fact is that both Maggie and Ugenda were born in Group 5 and they lived together for six years before the group split (whereupon Maggie joined Pablo and Ugenda joined Shinda). This happened many years ago so, we can’t say that they remember each other, but we can’t exclude it either!

The merge with Ugenda’s group went fairly smoothly. After a few antagonistic actions from dominant Ugenda toward Maggie, the group found a peaceful equilibrium and she re-established her dominance rank. However, during the process, infant Susuruka died and a young subadult male, Ntaribi, left the group and started moving alone. Luckily, at the beginning of 2015, Ntaribi rejoined the group.

Since then, Maggie’s story has continued to be interesting. On Feb. 17, she left the group, apparently due to the intrusion of lone silverback Giraneza, whose overtures she rejected. She traveled on her own for some days, with a special team of trackers trying to locate her based on a confusing mix of fresh and older traces. On March 5, trackers found her again alone. So, her story is both unusual and still developing, even at her advanced age!