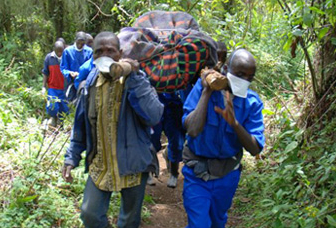 Karisoke staff and researchers brought the body of silverback Titus down from the mountain on Sept. 16, many weeping at the loss of their old friend. Titus, who has been followed by Karisoke staff since his birth in 1974, died on Monday, Sept. 14.

After a necropsy at the offices of the Mountain Gorilla Veterinary Project in Ruhengeri, Titus’s body was today carried on a stretcher by ten porters on a two-hour walk, for burial at the site of Dian Fossey’s old camp and her own gravesite. They were led by Karisoke Field Operations Coordinator Jean Bosco Bizimuremyi and a military escort. 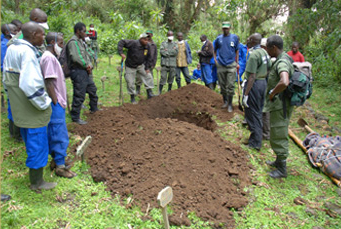 The burial site was dug in advance at the edge of a gorilla graveyard where other important gorillas have been laid to rest, including Titus’s old friend silverback Beetsme. 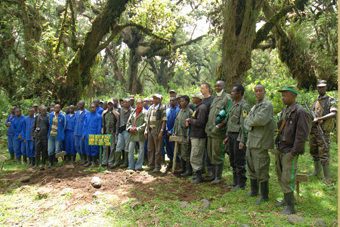 After a minute of silence, the chief park warden asked for speeches by those who wanted to remember the life of Titus. First to speak was tracker Faustin Barabwiriza, who has been with Karisoke for more than 30 years. He spoke of his experiences with Titus, whom he has known for decades. He recalled Titus’s peaceful nature, his kind leadership and his affection for family members.

Researcher Telesphore Nsengiyumva, who has been recording behavioral data on the Titus group since 2004, spoke next, noting all the changes that had occurred within the group in the past few years and how Titus’s good nature made possible the collection of such important information.

Karisoke research assistant Theodette Gatesire also talked about her time with Titus, especially in recent months when he began caring for the young Ihumure, whose mother had left the group. 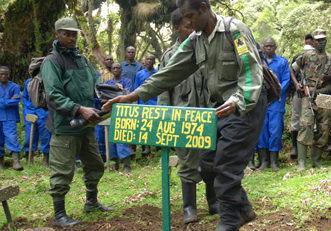 After words from park warden Prosper Uwingeli about the importance of this type of conservation and event, a wooden sign was placed on top of the grave, citing the dates of Titus’ life and the words “Rest in peace.”

Back in Bisate village after the ceremony, following Rwandan tradition, drinks were shared among the participants, a poignant conclusion to an emotional and sad day.