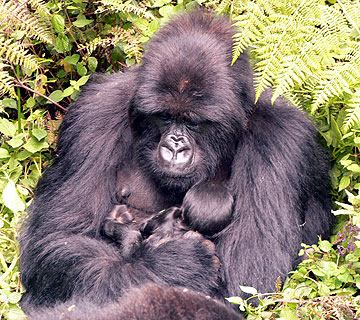 The new year started wonderfully with news of a gorilla birth in Beetsme's group, one of the three mountain gorilla groups we track regularly from the Karisoke Research Center.

Trackers arriving in the group on the morning of the first of January were greeted by Bukima, a young adult female, and her newborn infant. Bukima is the daughter of dominant silverback Titus and elder female Papoose. Her first infant, born in 2004, died as the result of a cleft palate.

The Karisoke team and the veterinarians of the Mountain Gorilla Veterinary Project have been carefully observing the new infant and are pleased to report that both the mother and infant appear to be doing well despite the unusually cold and wet weather for the month of January.