Continuing their roaming pattern, the Titus group was again outside of the Virunga National Park boundaries when Veronica Vecellio, Fossey Fund's Karisoke Gorilla Program Manager, and trackers arrived bright and early this morning. Vecellio reported that the group was moving east, "possibly to find an area where they can go out undisturbed." 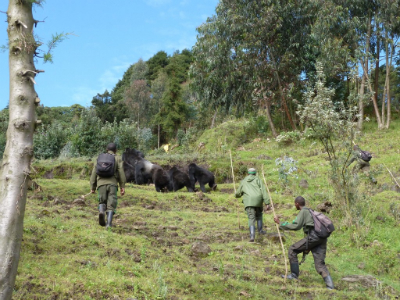 Around 8 a.m., the group began to move towards a patch of eucalyptus, some 300 meters from the park border. Vecellio made the decision to have three trackers, led by Titus team leader Telesphore Nsengiyumva, herd the group back into the forest. The trackers selected long bamboo sticks and alternated between waving them in the air and smacking the ground around them.

Vecellio said "the response was immediate and the gorillas began moving uphill slowly." Although several gorillas let out the occasional pig grunt, they were not particularly scared or stressed. Only 11-year-old blackback Pato made a clear sign of his frustration, and charged the team twice, both times screaming loudly. Undeterred, the trackers carried on and within 30 minutes, Titus group was back in the safety of the park – where, thankfully, they have stayed for the remainder of the day.