The gorillas of Titus group, who have been spending more time outside of the park lately, were successfully herded back into their protected forest yesterday evening by the Fossey Fund's Karisoke Research Center field staff. 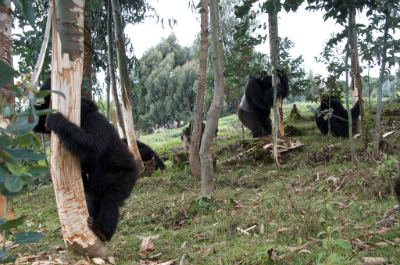 After the gorillas made nests and spent the night in the farmland that borders the park three nights ago, staff from the Rwanda Development Board, the Fossey Fund and the Mountain Gorilla Veterinary Project (MGVP) met in Kinigi to discuss their game plan for responding to this new development. After consulting the data on gorillas venturing outside of the park boundaries, they determined that the gorillas have been consistently leaving the park through the years. However, the length of time that they spend outside in the surrounding farmland has been steadily increasing. As concerning as it may be, this is still a natural behavior and an intervention is deemed necessary only in a case such as Titus's group.

The Titus gorillas slept within the park boundaries the night of October 17, but emerged the next morning at 7 a.m. They spent the day eagerly feeding on bamboo and eucalyptus bark outside the park, with a host of curious locals and amused tourists looking on. At 5:30 p.m., 10 Karisoke trackers formed a line and employed a "soft approach" (shouting and brandishing sticks) to herd the group back into the park. Moving slowly, the gorillas began to retreat into their protected habitat, without exhibiting any obvious signs of fear or stress.

The group again slept within the park borders the next night. However, when Karisoke trackers arrived this morning, the gorillas were already out of the park, feasting on bamboo. They moved out from the border as far as 200 meters, but at 1 p.m. three trackers were able to successfully herd the group back inside the safety of the forest.

The MGVP veterinarians will begin an internal parasite assessment (through fecal sampling) to compare the parasite loads of gorillas that spend time outside of the park with those that do not. As the ones that leave the park are in close contact with humans and domestic animals, it is a concern that they may be more affected by parasites. We hope that results from this analysis will help to determine the future approach to this annual dilemma.