Titus's Group Spends the Night Outside the Park

For the first time in their memory, the Karisoke Research Center's field staff who monitor mountain gorillas have observed an entire gorilla group sleeping outside of Volcanoes National Park. 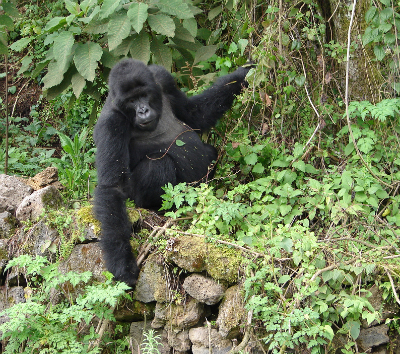 Titus's group, composed of five males and two females, began to spend a significant amount of time outside of the park boundaries last week. In fact, the group was observed out of the park three days in a row, often as far as 800 meters from the perimeter, spending an average of two to six hours in the surrounding farmland and bamboo patches.

The monitored gorilla groups are being lured out of the protection of their park because the bamboo grows much better in the surrounding, open farmland. Free from the densely vegetated forest, the rhizomes can spread out and send up numerous fresh shoots – an irresistible treat for the gorillas.

On Sunday afternoon, October 16th, Titus group's dominant silverback, Rano, led the other gorillas almost 400 meters out of the park to an area that he had discovered at the beginning of the month. The plot of land, running from Cundura hill down into the Susa area, is a mixed bamboo and eucalyptus field where the tasty shoots are growing prolifically; it is a gorilla's paradise. Silverback Rano and his group have been methodically consuming all of the bamboo and eucalyptus from top to bottom.

As of Monday, the group was nearing the bottom of the plot and they settled in for an afternoon of feeding. But at 6pm, after four hours of feeding, the trackers were astonished to see the gorillas begin to build their night nests – far from their protected forests. The Fossey Fund's anti-poaching team and trackers chose to camp close to Titus's group and are continually monitoring the situation to ensure that both gorillas and the people nearby are kept safe.

Unfortunately, Rano is undeterred by the human presence outside of the park and resistant to any of the field staff's attempts to coax his group back into the forest. According to Karisoke Gorilla Program Manager Veronica Vecellio, "all of the extreme cases of gorillas moving out of the park were done by Titus's group, led by Rano."

The people living around the park are understandably frustrated with the gorillas foraging in their fields. The Rwandan Development Board (RDB) and Karisoke field staff must remain vigilant and show an increased presence in the area. With the gorillas, local people and their livestock all intermingling in the landscape, a serious problem could arise.

The Fossey Fund's Karisoke Deputy Director, Felix Ndagijimana, is in contact with Prosper Uwingeli, the Volcanoes National Park's chief warden, to determine the appropriate course of action to take in the coming weeks. Additionally, an emergency meeting in Kinigi has been arranged for staff from the Fossey Fund, the RDB, the Mountain Gorilla Veterinary Project and the International Gorilla Protection Programme to meet and discuss possible solutions. The meeting will address both complaints from tourists (who are disappointed because they are not able to see the gorillas in their natural habitat) and complaints from the community members (whose crops are being raided by the gorillas). Ndagijimana says that they hope to form a team of people who can make recommendations on a case-by-case basis. We will report the results of the meeting as well as any strategies implemented.