Fossey Fund gorilla trackers witnessed an interaction between two large groups of mountain gorillas today. One of the groups (called Ntambara group) is followed every day by the Fossey Fund. The other group (called Amahoro group) is followed by the Rwanda park authorities, for visitation by tourist groups. 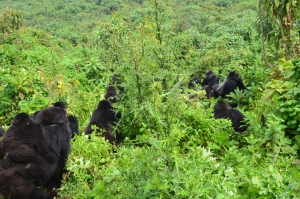 At first, the gorillas from each group just watched each other, wtih the silverbacks in "strut" stance. But soon, one of the silverback's from Amahoro group grabbed a gorilla from Ntambara group, leading to a lot of screaming and displays. Luckily, however, no real fighting occurred and no females attempted to transfer between the groups. Eventually, Ntambara's group moved further up hill, to try and get away from the interaction site.