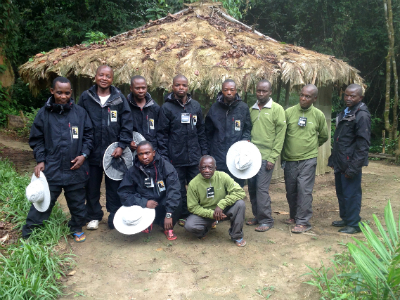 The Fossey Fund established a Grauer’s gorilla research and conservation program in the Democratic Republic of Congo (DRC) in 2012 to begin studying the highly endangered and lesser-known Grauer’s gorilla. We established a research and conservation field station in the village of Nkuba at the edge of the forest and have begun tracking unhabituated Grauer’s gorillas to assess their numbers and stability of the population, as well as to protect them. These new initiatives were made possible, in part, through generous contributions from The Turner Foundation, the Daniel K. Thorne Foundation and an Anonymous Foundation. These funders are enabling the Fossey Fund to respond to the critical conservation needs of Grauer's gorillas, which are considered one of the 25 most endangered primates in the world.

Unlike the mountain gorillas, which we’ve studied for decades at the Karisoke Research Center in Rwanda, and Grauer’s gorillas at Kahuzi-Biega National Park, these gorillas are not acclimated to human presence. Fossey Fund Conservation Program Manager Escobar Binyinyi talks about the objectives, process and basics of tracking unhabituated Grauer’s gorillas:

Research protocols include tracking and monitoring

After evaluating the species in this area, looking at the spatial distribution in the forest and confirming the presence of gorillas in the area where the Fossey Fund works, we had to transition to regular monitoring and research. To begin this, we had to start tracking the gorillas.

When it comes to tracking, there are two main objectives: behavioral study and dietary analysis. Regarding the study of the diet, we want to know what the gorillas eat. With the study of behavior, we want to understand how gorillas live in their natural environments, which means we want to know the average distance they travel each day, the size of their groups, the size of a group’s home range, and whether or not there is an overlap in home ranges among different groups.

Tracking consists of following the trail of gorillas from one nest site to another one, always keeping a day’s distance between the gorillas and the trackers. To remain at this distance, trackers need to find very subtle signs, such as food remains, direction of bent vegetation or footprints. The presence of humans can cause gorillas to adopt unusual behaviors—walking longer distances, becoming more spread out while walking, leaving fewer food remains—which all interfere with the tracking process and the gorillas’ lives.

What happens in the forest 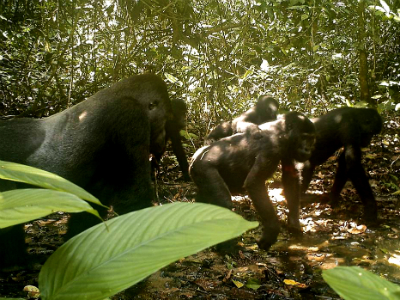 Preparing for a trip to the forest starts at the base camp. We establish which trackers should be on each team depending on their skills, buy food for the teams, hire porters, and pack supplies and equipment. We have two teams permanently tracking gorillas, alternating each week. The second team leaves the base camp with the coordinates showing where the last team set up camp, so they can start where the first team left off. Each team is composed of four trackers, one research assistant and sometimes the program manager or the research director. In the field, we set up a camp in an area where we want to start looking for trails, but we have to be ready to move that camp depending on where the gorilla group goes.

To begin tracking, we select a random location on the map within an area in which we believe there are gorillas, put the coordinates in a GPS device and then begin walking to the area using a compass; that point will be our landmark. From the GPS point we begin walking in a circular pattern around the point, with a diameter of about 800-1,000 meters. The objective is not to follow a precise outline of a circle but rather to look for spots that are likely to be visited by gorillas and try to locate gorilla traces that are one to three days old. If a fresh trail is not found, we will repeat the process with a second or even a third GPS point.

A trail may be lost in these five circumstances:

When we lose a trail, we come back to the location where we last saw the trail and spread out in a large area to try to relocate it. If we still cannot find it, we walk in a circle with a diameter of 100-250 meters around the area. If we still can’t after that, we meet and try very carefully to discern what happened.

Keeping a distance from gorillas