Protected area authorities in Rwanda, Uganda and the Democratic Republic of Congo, along with partners such as the Dian Fossey Gorilla Fund, have just embarked on a new population census to determine how many mountain gorillas remain in the Virunga massif, which straddles the three countries. The last such census was carried out in 2010 and showed 480 mountain gorillas. (There is a separate population of about 400 mountain gorillas in Uganda's Bwindi area, which is not included in this current census). 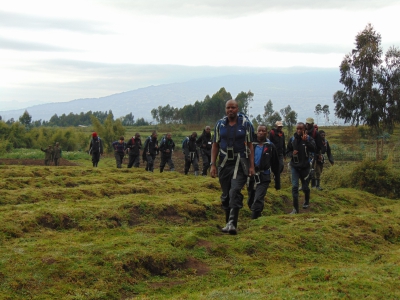 The new census is being carried out under the umbrella of the Greater Virunga Transboundary Collaboration (GVTC), which was formally established in September, with the signing of a landmark treaty on transboundary conservation by authorities from Rwanda and DR Congo, as well as commitment from Uganda.

Read our initial story on the census here and stay tuned for census updates from our field staff who are out there counting right now!