[This is the fourth of a five-part series]

Sabyinyo lodge has a vegetarian soup for lunch and supper and two main course options, one of which is vegetarian. The food has been fantastic! I’m sure all the calories I burned off trekking will be made up by the delicious food! 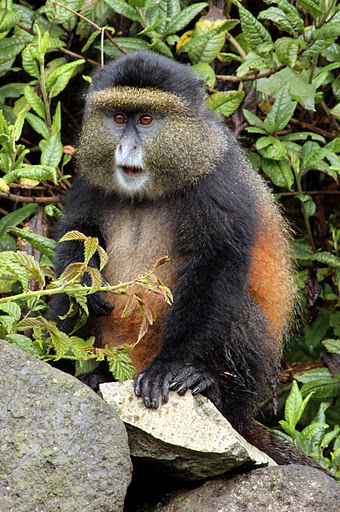 After my Susa trek yesterday I was praying for an easy day. Thankfully my prayers were answered. We walked for about 45 minutes through farmland and then came to the stone wall that borders the national park. The forest looked dense beyond the wall. Was I up for the challenge again? Well, it turns out that the little darling monkeys came to me this time! There they were right at the stone wall. They were in the trees, which made taking pictures difficult.

We decided to climb the wall and go into the bamboo forest. We found a couple of monkeys with less foliage around them but it was pretty dark for photos. It was still pretty incredible to see them leaping above, eating and playing. After a while we decided we would try our chances on the other side of the wall again. It’s a good thing we did because there they were sitting on the wall. They just posed for us…and did a little bit of monkey mating too. It was amazing to see them so close. They are strange looking little monkeys but beautiful just the same. Then it was another 45-minute easy walk back to the jeep. NICE!!