Twenty Years Since the Death of Founder Dian Fossey 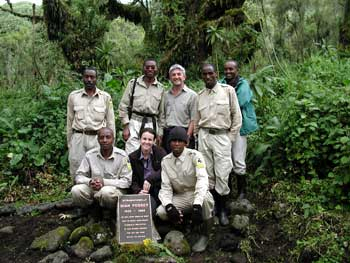 December 2005 will mark the 20th year since the death of Dr. Dian Fossey. And it's been nearly 40 years since she began her groundbreaking work in Africa. Today, we at the Dian Fossey Gorilla Fund International carry on her legacy, with more than 50 gorilla trackers and anti-poachers, a team of scientists and researchers, and the aid of high-tech equipment and tools Fossey never dreamed of.

In 1983, Fossey wrote in her book Gorillas in the Mist that she feared the mountain gorilla would be extinct by the end of the century, and thus hold the unique and unfortunate distinction of having been both identified and extinguished within a single century.

But, a recent census of the mountain gorillas showed that their numbers, while still tiny, are increasing. Currently, the population stands at 380, up from 324 in 1989, when the last census was conducted, and up from the 242 that Fossey counted in 1981. All of the increase occurred in the Karisoke sector of the Virungas, the area that Fossey studied and which we have continued to study and protect since her death. We think Fossey would be surprised and proud that her work and legacy have helped to secure their future.

The struggle is by no means over. Three hundred and eighty is a terribly small number for an entire population. In addition, the fate of other types of gorillas is also precarious and scientists believe their numbers are plummeting. In the Democratic Republic of Congo, for instance, where we are now working with a number of community-based preserves and national parks, we estimate that the eastern lowland gorilla population has dropped to some 5,000, down from about 17,000 ten years ago.

We are grateful to all who have helped us continue and expand the work begun by Dr. Dian Fossey. There is much to overcome and our goals are big, but, working together, we know we can continue to succeed in this long journey.