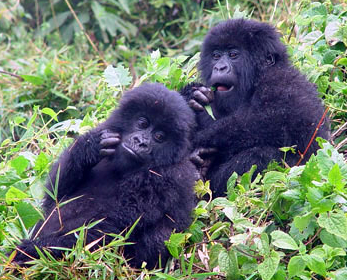 When twin mountain gorillas were born in Rwanda in May 2004, observers were especially concerned about several issues that could affect their survival. One was the ability of the mother to carry both infants at once, since it would be some time before they could travel on their own. The other concern was whether the mother would be able to care for both youngsters as they grew older and bigger.

Now that the twins (one male and one female) are more than 2 years old, we are happy to report that they are both healthy and strong and beginning to show signs of independence, such as moving around on their own, climbing trees, trying out new foods, and learning to build night nests.

Prosper Uwingeli, formerly a research assistant for DFGFI at Karisoke (2000-2003) and now the Planning, Research and Monitoring Warden for the Rwandan Office of Tourism and National Parks at Volcanoes National Park, reports that the twins are very close and watch each other during feeding and resting. They often rest together and have been observed "consulting" with one another when they want to join the mother for suckling. Uwingeli also reports that one of the group's subordinate silverbacks is often seen in close proximity to the twins and their mother.

A collaborative research study of the twin gorillas in now underway by Prosper Uwingeli (ORTPN), Alison Fletcher (University of Chester), and Katie Fawcett (DFGFI). Uwingeli presented preliminary results of the study at the recent International Primatology Society Congress in Uganda.