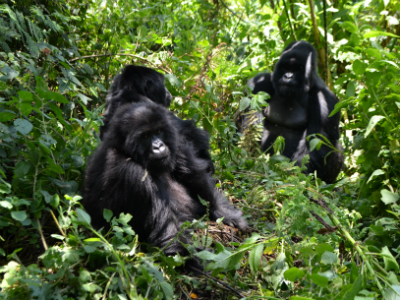 The last few days have marked two exciting events for Musilikale’s group: a transfer and a birth! On March 9, female Rugira from Kuryama’s group was seen with Musilikale. The transfer happened the day before during an interaction that occurred after the trackers left the group. The interaction site was found, though, and it showed signs of intense activity and multiple displays. Rugira, who will turn seven in April, appears to be fine in the new group, and she was observed playing with dominant female Mahane’s son, Itorero.

On March 10, Mahane—one of the remaining gorillas born while Dian Fossey was alive—gave birth. Mahane is daughter of the matriarch, Effie, and sister to two notable females: Poppy and Maggie. All three of Effie’s daughters are notably strong: Maggie, who has recently shown her independence skills; Poppy, who is the oldest known gorilla but recently transferred with a lone silverback; and Mahane, who is the dominant female of Musilikale’s group. This is the 30-year-old Mahane’s seventh infant.

Musilikale’s group has grown quite a bit since it was first formed in 2013. At the time, the group included seven gorillas, but now is composed of 12 individuals (three silverbacks, one blackback, five females, one juvenile and two infants).