Last month we reported on the attempts of silverback Umushikirano (nicknamed Rano), who went off on his own last year and then was joined by two females, Makuba and Mawingu. After spending all of April and some of May together, a separation happened on May 17, when the two females left Rano to join an unknown gorilla group ranging over the Congo border of the Virunga massif. The location of this group was pinpointed on May 19 (via nest site) and on the same day, Rano was seen following the trail of the group. (Gorillas make individual nests at night for sleeping, and close observation of these after they are abandoned the next day gives us information as to the number of gorillas, as well as their age.) 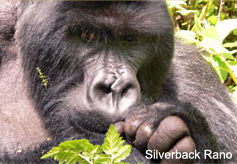 When they were together, the three gorillas had been ranging most of the time on the Congolese side of Mt. Visoke, but not moving long distances. In general, Rano was always close to Makuba, while Mawingu was following behind. However, the females indicated several times their intention to abandon Rano. On May 5 and May 10, Mawingu and Makuba separated from the silverback for one and two days respectively, traveling alone. During this time, Rano continued making vocalizations and chest beats to call the two females back. 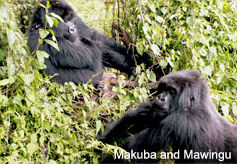 The definitive separation happened on May 17, when Rano was found alone displaying and chest beating while moving around. The trail left from the two females led into an unhabituated wild group (one that is not observed by Karisoke or park staff, and thus not accustomed to the sight of humans). A nest count of three consecutive nest sites showed that four individuals, initially, composed the group: one silverback, two adult females or blackbacks, and one juvenile. The group then increased by two nests after the arrival of Makuba and Mawingu. The trail followed did not show any sign of interaction, which may be explained by the independent decision of the two females to leave Rano traveling alone until they met the wild gorilla group.

The loss of the two females from Rano provides some melancholy, but at the same time is very exciting to the Karisoke field staff. It is true that our chance of seeing them again is very low, but it is also true that this episode shows a natural exchange between habituated and non-habituated groups in the overall gorilla population inhabiting the Virunga massif.