Karisoke Research Center staff celebrated the birth of two mountain gorilla infants in January. Both mothers had lost previous infants, so we are hoping for the best this time for each of them. We also observed the death of elder female Cyiza, who died on Jan. 25. 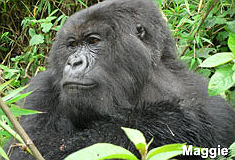 The new year started with a wonderful surprise on Jan. 19, when 29-year-old female mountain gorilla Maggie gave birth. The infant, a female, was immediately under careful observation by the Karisoke field staff, due to the unfortunate deaths of Maggie's last three infants. There was an alarm on Jan. 27, when the infant started crying without apparent cause, but soon returned to normal, nursing at a regular rate.

Maggie is a confident mother and is the dominant female in her group, led by silverback Bwenge. All the females in the group respect Maggie's authority and they follow her leadership, which she also exhibits when the group is faced with danger, such as the approach of another group. However, her strong behavior also can put her in conflict with the other females at times, which could endanger her new infant. A violent interaction between Maggie and another female was observed two days before the infant's crying episode and we worried that the infant might have suffered some physical trauma. However, despite the few episodes of internal conflict the group appears calm and the newborn has been well accepted, with silverback Bwenge often close to Maggie during resting time.

Karisoke staff were delighted again, when female Bukima gave birth on Jan. 26. Bukima had transferred from the Titus group to the Isabukuru group early last year, leaving behind her young son Ihumure. Young Ihumure later died following the death of famed silverback Titus in Sept., so staff are happy to see Bukima starting over with a new infant in her new group. 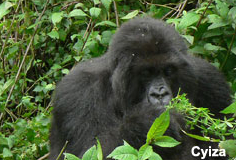 Despite her old age, the death of the 42-year-old Cyiza happened as a surprise, since she lived with an unexpected vitality the last years of her long life and only showed signs of weakness in her last few weeks.

The first episode happened on the last day of 2009 when she mysteriously disappeared, not seen again until Jan. 6. She was apparently fine and acted submissively to the displays of dominant silverback Bwenge, who had visibly noticed her absence. On the following days she was often behind the group, but still feeding and even climbing trees.

On Jan. 18, Cyiza was seen with a swollen hand from an old injury and was moving slowly, trying to catch up with the group. A fecal analysis by the Mountain Gorilla Veterinary Project (MGVP) showed an abundant parasite load and her weakness continued to increase. On Jan. 25, she was found dead, 600 meters from the group. Our trackers determined that the previous day, her group had crossed Susa's river and that Cyiza was not able to make it across. Bruises on her face showed that she had fallen, with one foot in the water.

Cyiza's body was recovered for the necropsy and a report by Dr. Jan Ramer of MGVP showed that she was extremely thin and her small intestine was loaded with tapeworms, though the complete causes of death were unclear.

Cyiza was first seen in October 1984, when she was estimated to be about 16 years old. She had several offspring, some of whom are still living, including daughter Faida who was living with her since her birth in 2000. In her last year she was very calm and well integrated in her group, though no sexual encounters were observed. Her calm dignity and sharp experience made her a respected member of the group.