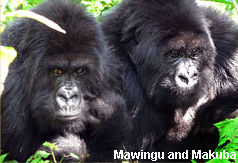 The other two females, 17-year-old Makuba and 22-year-old Umusatsi, remained with Beetsme’s group and have gradually been accepted as new members. Umusati’s decision to leave Pablo’s group did not seem surprising, since her 2-year-old infant had died recently (in November 2006) and she seemed to have become a passive member of the group, rarely interacting with other individuals. But the transfer of Makuba was unexpected, since it involved leaving behind her nearly 4-year-old daughter Turimaso.

The welcome in Beetsme’s group followed a pattern we have observed in recent transfers among the gorilla groups we monitor. The subordinate males in the group all made efforts to display their dominance to the new females, following their movements and sometimes exhibiting aggressive behaviors. The females tried to avoid these approaches, yet remain submissive at the same time. They were often observed all resting together.

The male dominance displays were headed by Kuryama, who is the second-most-dominant silverback in the group, next to top leader Titus. Younger silverbacks Vuba and Kirahure were also active in these displays. Dominant silverback Titus seemed to remain indifferent to these events and busied himself with routine activities. Only once did he intervene, and this was when Makuba attempted to gain dominance with an older female (Ukuri) already in the group. On this occasion, Makuba made an aggressive vocalization to Ukuri, who was passing just in front of her. Titus, who was a few meters away, jumped onto Makuba and began biting her. This provided the unfortunate Makuba with a very clear lesson from the boss to maintain her status of “last arrived.” 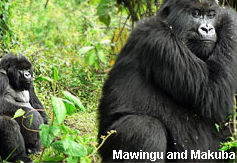 The rest of the group engaged in a more peaceful welcome of the new females and unexpected alliances were soon established. Mawingu, who at first was very competitive with both females, later became very friendly, spending most of her time with them even when they become isolated from the rest of the group. Mawingu, and her daughter Tayna, are often in physical contact with Makuba, as they rest together and groom one another.

Makuba and Umusatsi now seem to be fully integrated into the group. Generally, they tend to follow silverback Kuryama, staying close to him when the group subdivides into two parts, as is now common.