Fossey Fund trackers are continuing to observe interactions between the two largest mountain gorilla groups monitored in the Virungas – Pablo group and Susa group. Pablo group has been monitored by the Fossey Fund for decades, while Susa group is tracked by the Rwanda Development Board, since it is one of the groups designated for tourism visits.

The two groups have a history of interacting but these have gotten particularly frequent recently. This week we noted four interactions between the groups, and recorded the transfer of four females from Pablo to Susa. 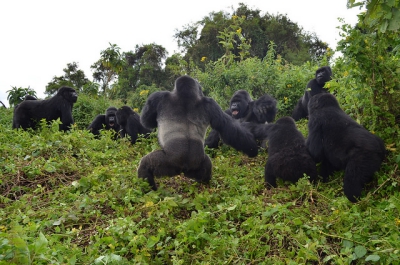 This morning, our trackers saw the remnants of an interaction earlier in the day, and then observed an additional interaction, but both seemed to be peaceful. During this time, Pablo group was “sub-grouped” – half of the members were with silverback Cantsbee and the other half were with silverbacks Gicurasi and Kureba. The latter subgroup is the one that was involved in the interaction, with blackbacks (young males) from it and from Susa group playing together. This latest interaction lasted about one hour and no transfers were seen. Afterwards, the two subgroups of Pablo reunited.