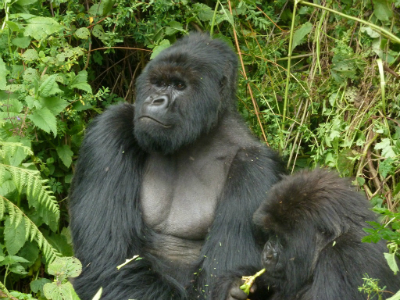 Ugenda’s group interacted with a lone silverback, resulting in the loss of his three females to the outsider. The lone silverback was later identified as Gushimira, who had left Pablo’s group in August 2011. The interaction was not seen by trackers, but evidence on the trail suggested that it happened yesterday evening.

When trackers arrived they saw all of the three females of Ugenda’s group (Kanama, Inziza and Kurudi) with the lone silverback. Ugenda was badly injured and he stayed with the remaining members, including the females’ three offspring. Sabato, Kurudi’s infant, is still very young; he will be 3 in March.

Sabato was whimpering and looking for his mother. He tried to go off to look for her, but at 20 meters from the group he changed his mind and rejoined Ugenda, probably scared to be alone. Silverbacks Ugenda and Wageni are both in bad shape, badly injured and weak.

According to the evidence, the interaction was intense: lots of blood on the trail, flattened vegetation and signs that the gorillas had walked a long distance.

At the end of the trackers’ observation, around 3 p.m., Ugenda was moving in the direction of Gushimira and the females had stopped 50 meters from them when it started raining.

Most of the Karisoke staff were in Musanze attending a meeting of the Rwanda Development Board with all our team leaders. Researcher Samedi was in the forest with another gorilla group and fortunately was near enough to join the lone silverback and the females in the late morning, so we were able to take some pictures and record their behavior (we could identify the silverback from his pictures).

Gushimira was there for two hours. In the morning the three females were all in physical contact with him. Kurudi and Kanama were the closest to Gushimira and they were grooming him. They were all visibly tired and spent lots of time resting. After resting, the females started feeding, while the silverback made some displays and lots of sexual vocalizations.

We were surprised to see Gushimira in that area, as he had left Pablo’s group with two other males in 2011 and the Visoke area where he found Ugenda’s group is not really Pablo’s range. Besides that, we had not see the three males since August 2011. It’s very interesting that he doesn’t seems to have a scratch, while Ugenda and Wageni are quite injured.

Tomorrow we will all go there and see what happens next, and we will accompany veterinarians to Ugenda’s group to check on the injuries.
Veronica Vecellio, Gorilla Program coordinator