Ugenda Regains His Females — For Now

Fossey Fund trackers and research staff, as well as Dr. Dawn Zimmerman from Gorilla Doctors, went to see what had transpired with Ugenda, Wageni and group members this morning and found them very close to where they were when left yesterday. Ugenda and Wageni were weak, with very visible wounds. Ugenda has a huge cut behind his neck and on the hand, while Wageni has a big and deep cut on his arm and several small wounds. 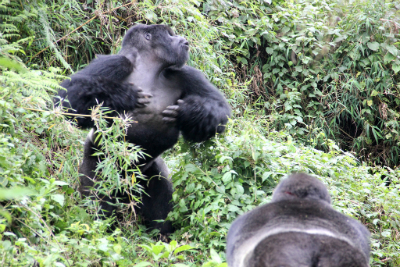 Around 10 a.m. they finally started feeding. The youngsters were all close to the silverbacks. The three females were still with silverback Gushimira (see previous blog), resting together about 200 meters from Ugenda. Soon, we heard the first hooting from Ugenda. Gushimira stood up and was visibly stressed, even if physically he looked very well (only a very small wound on his hand).

In a few minutes the two groups faced each other and a very long and intense interaction started. The females went immediately back to Ugenda’s group and all youngsters rejoined their respective mothers. Ugenda and Wageni showed unexpected strength (considering their status in the early morning) and they started chasing Gushimira away.

All the silverbacks made several displays charging each other, with Ugenda and Wageni literally pushing Gushimira away. The females and youngsters were following and sometimes participated in charging Gushimira with lots of screams. 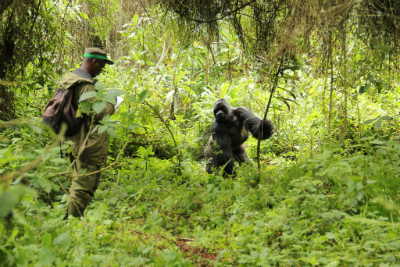 When we left the group the interaction had calmed down but Gushimira was still very close. All the gorillas looked very tired. It seems that Ugenda’s group is back with him, but anything can still happen, especially since the lone silverback Gushimira remains nearby. Stay tuned for updates tomorrow!