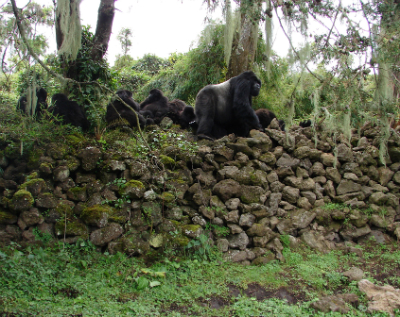 Ugenda’s group is now joining the other gorillas in their out-of-park excursions. But today, the gorillas encountered something outside of their protected forest that sent them running for the hills. Fossey Fund researcher Winnie Eckardt, PhD. and the Fund’s Karisoke Research Center field staff think that the group may have stumbled upon a swarm of bees. There are many bee hives in the farmlands around Volcanoes National Park, maintained by the local communities. A multitude of Karisoke researchers have been stung in the line of duty over the years.

By 8 a.m. the group had already traveled 300 meters down from the park border. The team observed the gorillas crest a hill and disappear from view briefly before they all turned and came running back, screaming and aggressing one another. Eckardt reported that the youngsters were squealing at their mothers, trying to cling on to them for the ride. The group kept moving up the slope and came to rest in a bamboo patch about 80 meters from the park border. At 9:50 a.m., the group moved back into the park. 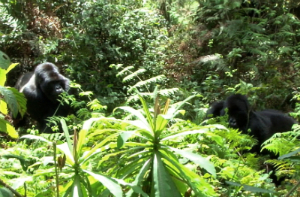 Silverback Gwiza, who has been interacting with Titus’s group for several days now, continued his relentless pursuit of female Fat (Ubufatanye) today. He continued to display towards her, attempting to get her attention and win her back. Field staff reported that dominant silverback Rano displayed and charged the lone silverback, with Turakora and blackback Pato backing him up, but Gwiza is not easily intimidated. He spent much of the day staring at Fat, but the female remained close by Rano, safe within her group, obviously where she intends to stay. Rano led his group about one kilometer up into the park before coming close to Inshuti’s group. There was an auditory interaction between the groups, but Rano did not proceed further. It seems he feels he has enough on his plate with Gwiza already!
Jessica Burbridge, Field Communications Officer