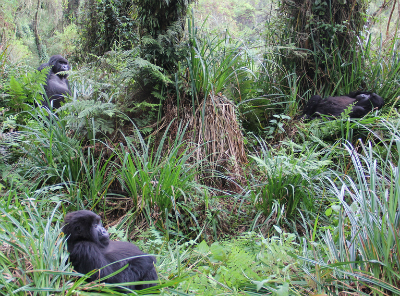 For the past several weeks, Dian Fossey Gorilla Fund researchers and trackers have witnessed a number of very interesting interactions among three of the mountain gorilla groups that we monitor regularly: the Titus, Bwenge and Kuryama groups. The frequency of interactions among these groups is particularly interesting as they have a shared history. All three groups were originally founded by members of the old Beetsme group, which formed in 1985 when Beetsme, then a 19-year-old lone silverback, acquired several females.

Beetsme, the group’s leader, was named by Dian Fossey one day in 1976 when she was asked about the identity of an unknown lone silverback. She had only encountered him once before, a year earlier, so she replied, “Beats me!” and the name stuck. Four years after the formation of Beetsme's group, however, silverback Titus, made famous in the PBS Nature documentary “The Gorilla King,” challenged Beetsme’s status as dominant silverback and won. From that point on, Titus was the dominant silverback in the Beetsme group until he passed away in 2009. According to Veronica Vecellio, the Fossey Fund’s gorilla program coordinator, Titus is one of the longest, if not the longest, cases of a silverback retaining dominance in a group. However, in the last few years of Titus’s life the group began to split up, with a few of the original members and descendents of Titus forming their own groups, such as the Kuryama and Bwenge groups. Those who remained with Titus became known as Titus’s group, and are now led by Titus’s son Rano.

In the recent interactions, the three groups have met on many occasions on a one-on-one basis. The first recent encounter, between Titus’s and Bwenge’s groups, occurred in the bamboo zone on May 17. When trackers arrived at 8:19 a.m. to monitor the groups, the interaction was underway. The gorillas from both groups were calmly mixed together and showed no displays of aggression towards one another. In fact, 8-year-old juvenile male Segasira from Titus’s group was playing with 6-year-old juvenile male Ntaribi from Bwenge’s group. At 8:21 Titus’s group started to move away from the area. Segasira and his brother Urwibutso stayed near Bwenge’s group for another 20 minutes before catching up with their own group.

After the first interaction we recorded, four more interactions occurred among the groups in the following three weeks. One of these interactions was on May 30, between the Kuryama and Bwenge groups. In this instance, Bwenge’s group closely followed Kuryama’s group, walking behind them for about 40 meters before all the gorillas stopped and faced each other. The juvenile gorillas of both groups began strutting, making vocalizations and displaying signs of aggression. The silverbacks from each group did not become involved in the action; instead, they remained about 20 meters apart, watching the others. After a while, Vuba, dominant silverback in Kuryama’s group and Bwenge, namesake lead silverback of Bwenge’s group, each tried to get the youngsters to return to their respective groups. However, the youngsters from both groups ignored them and continued to interact with each other. The interaction lasted for well over an hour and finally ended only when the silverbacks and adult females from both groups moved away from the area in opposite directions and the youngsters eventually followed.

Among all of the interactions only one, which occurred on June 2 between the Titus and Bwenge groups, was not calm and peaceful. Titus’s group was located by trackers outside of the park at 8:28 a.m. A minute later, the trackers saw a female run toward the Titus group from a distance of 70 meters away. The female was Faida, from Bwenge’s group, whom trackers had reported as missing from her group earlier that morning. Faida approached the whole group but only the silverbacks acknowledged her displays. The interaction quickly became violent when the silverbacks in Titus’s group began biting, kicking and grabbing her. Bwenge heard Faida’s screams and approached the scene 10 minutes later. When he arrived, the silverbacks of Titus’s group backed away and Bwenge and Faida left the area.

Gorilla interactions happen all the time, but it is unusual for such familiar groups to interact so often, in such close proximity to each other, and in a generally peaceful way. Even the one aggressive interaction on June 2 was very short and quickly resolved. Vecellio believes that perhaps the character of the recent interactions among the Titus, Bwenge and Kuryama groups are a result of the silverbacks in each group being related to and raised by Titus, who was known for being a strong, peaceful leader. “It is clear by these interactions that Titus, who was a very calm silverback, transmitted his behavior to the other gorillas in the group," she says. "The silverbacks in these groups are all acting as Titus would have acted himself.”

As the mountain gorilla population is increasing, due to intense conservation activities like the Fossey Fund’s daily monitoring, interactions are growing more and more frequent. However, in general these encounters are rarely peaceful, according to Vecellio. “They are normally intense and stressful situations in which silverbacks of both groups have to protect females and infants at all costs. Titus transmitted his behavior to the other gorillas in his group and it seems the silverbacks in these groups have inherited their father’s peaceful temperament.”