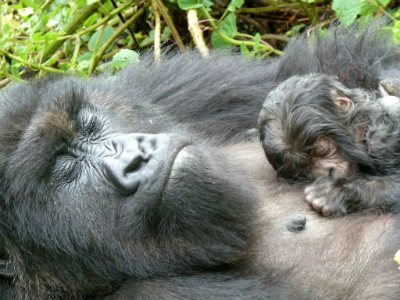 Yesterday we announced the birth of a newborn in Isabukuru’s group, to female Muganga. Today we had our first good sight of the infant. Our researcher Didier Abavandimwe was there specifically to observe the newborn and collect routine behavioural data.

The infant looks fine and so does the mother. He is quite big for a two-day-old infant, which doesn’t surprise us as Muganga is a large female.

This is the second birth for 17-year old-Muganga. Her first one, named Rugira, was born in Kuryama’s group and was left there at age four in the care of dominant silverback Kirahure, when Muganga left the group to join Isabukuru in June 2011.

The infant will be added to the list of 12 gorillas born in Rwanda since last June — five in research groups and seven in groups habituated for tourism — who will be given names during the annual naming ceremony (Kwita Izina 2013) organized by the Rwanda Development Board, which will take place in Kinigi on June 22.