Last week, a lone silverback interacted with one of the groups monitored regularly by Fossey Fund staff (called Ntambara's group). This resulted in the group breaking up into several subgroups, and the unfortunate deaths of two infants. The resulting events are still ongoing, and our staff has divided up into multiple teams of the most-experienced trackers to monitor each gorilla, and to search for those who become dispersed. (For full details on the intial events, click here for a news story posted yesterday). 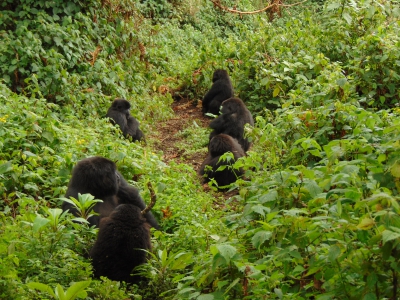 One of the subgroups is being led by female Nahimana, with five other gorillas. Another female, whose infant died as a result of the incident, has joined a second lone silverback, along with two other females. It is interesting to note that both of the lone silverbacks involved in these events came from a group that is monitored by the Rwandan national park authorities for tourist visits, called Amahoro's group. The first, named Mizero, was involved in the initial incident last week, with the second, named Himbara, arriving later.

Ntambara's group had already had a very stressful year, after two leading silverbacks (Ntambara and then Ugutsinda) died after undiagnosed illnesses (although Ntambara's body was never found, despite intense searching after his disappearance in February). Left in charge of the group was young silverback Twibuke, who is now in a tiny subgroup consisting of just one other gorilla, young male Inkumbuza.