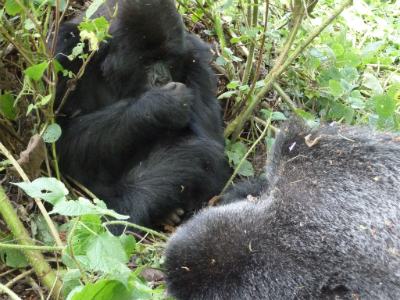 The Dian Fossey Gorilla Fund staff are very sad that we must report the death of silverback Urugamba. He was the leader and only silverback in his small group of just seven gorillas and was always known for his peaceful demeanor.
After our field staff found Urugamba very weak in his nest yesterday, a team including staff from the Fossey Fund, RDB (Rwanda park authority), and Gorilla Doctors went to assess his condition first thing this morning.
We cannot say yet what caused Urugamba’s death. He appeared to be in good health on Wednesday when he was visited by trackers and researchers. His sudden illness caught us all by surprise. A necropsy will be performed by Gorilla Doctors, but we do not want to further stress the group by removing the body too soon.
Because there are no other mature males in the group, the females will eventually have to find a silverback to join. Pasika and Bishushwe are certainly experienced enough to move around the forest and find food, but they cannot protect themselves and their offspring from lone silverbacks or other groups.
Fossey Fund staff are all very concerned for the group, especially the infants, but of course we must let the gorillas determine their own path without human interference. We will be collecting behavioral data daily to see how the group responds to Urugamba’s death. Urugamba’s group was one of only two single-male groups Fossey Fund currently monitors, so this is an important and unique opportunity to learn about gorilla behavior under these circumstances.
Please see the full news story here for more details.

This information would not be possible without your support for the Dian Fossey Gorilla Fund International’s daily monitoring and protection of endangered gorillas and their habitats.