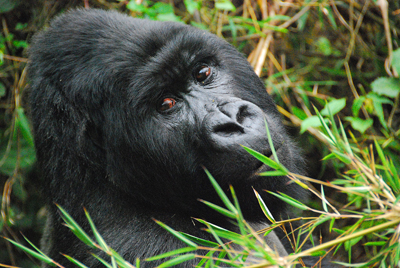 Vacations to Go, one of America’s leading travel agencies and travel publishers as well as the largest seller of cruises, has become an outstanding corporate sponsor of the Dian Fossey Gorilla Fund International, supporting our work conserving mountain gorillas. This role fits the company’s mission well, as they offer many African safaris and tours, including excursions to see mountain gorillas in Rwanda and Uganda, and regularly publish articles about and support travel operators that practice responsible and sustainable tourism.

Vacations to Go owners Alan and Karen Fox became individual contributors in 2010 after finding the Fossey Fund on the Internet, but when they visited the gorillas themselves that year the experience “took us to a different level of commitment,” says Alan Fox. “One look in those human-like eyes convinced me that these animals must be saved from extinction. . . I was aware of Dian Fossey’s work but did not know her organization had survived until we were preparing to travel to see the gorillas. Through sheer coincidence, my wife and I ended up at the same lodge in Rwanda where Clare Richardson (Fossey Fund president and CEO) was staying. We trekked out to see gorillas on two occasions, got to know some other supporters of the Fund during meals at the lodge and toured the Karisoke Research Center, all of which left us convinced that we needed to pitch in.”

The next year, Fox wrote to Richardson to propose that Vacations to Go become a sponsor. The company now contributes $25,000 each year and also helps to get the word out about gorilla conservation. Excellent articles on the Fossey Fund’s work have appeared in its 300,000-circulation magazine Vacations and the Fossey Fund is mentioned in e-newsletters distributed to millions of subscribers. Alan and Karen Fox also act on their personal commitment by contributing generously as individuals.

“I believe 100 percent in the work being done,” says Fox. “When you walk among these gentle creatures and see how similar they are to humans and how vulnerable they are in their fragile environment, you realize that the services provided by the Fossey Fund are as essential as they were when Dian Fossey was alive. They must be protected from poachers, trophy hunters, farmers who would burn the forest to plant crops, diseases carried by humans, rebels on the Congo side of the park. . . .The list goes on and on. This critically endangered species must have focused, intelligent and well-connected advocates in order to survive the many challenges it faces, and the folks at the Fossey Fund are just that.”

The current issue of Vacations highlights the Fossey Fund’s work with communities that neighbor gorilla habitats. Fox recognizes that these programs contribute to the economic growth and stability that benefit the people who share the gorillas’ ecosystem. The tourism industry also has a role to play, he says: “It is often money from tourism that pays to protect the animals and the environment from the kinds of threats that exist in Volcanoes National Park.” Vacations to Go goes the extra mile to make sure that it is helping gorillas and people thrive.