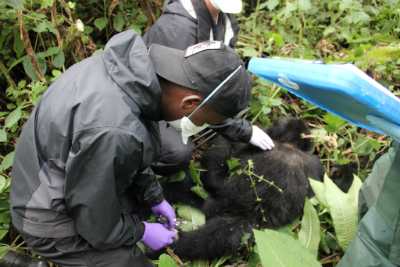 Today, a large team visited Kuryama’s group to remove the remaining rope from a snare that caught 4-year-old female Dukore yesterday. Although Dukore had managed to escape from the snare, she was still left with rope encircling her left ankle.

The team was able to find an opportunity to dart Dukore relatively quickly this morning. She was sedated at 10:15 a.m., and vets could soon see that although the rope around her ankle was tight, it was not affecting circulation to the foot and had not created any serious wounds. The rope was also very short and frayed at the end, indicating that she may have been trying to remove it herself using her teeth. Veterinarians were able to remove the rope and give her precautionary doses of antibiotics and anti-inflammatory drugs within half an hour. When Dukore awoke, she remained alone for some time, crawling into a hagenia tree to rest. However, she later rejoined the group, and rested in contact with her mother.

The group was not particularly stressed by the intervention. Only the second-in-command silverback Vuba approached the vets as they worked, but trackers were able to chase him away easily. Fossey Fund staff note that the youngsters in Kuryama’s group are relatively independent at a young age, and this makes interventions within the group easier as trackers do not have to stress the gorillas much by trying to separate a youngster from its mother to intervene.

The Dian Fossey Gorilla Fund International’s daily monitoring and protection of endangered gorillas and their habitats would not be possible without your support. To help, take action-donate.