Wageni Makes a Bold Move; What Does it Mean for Ugenda's Group? 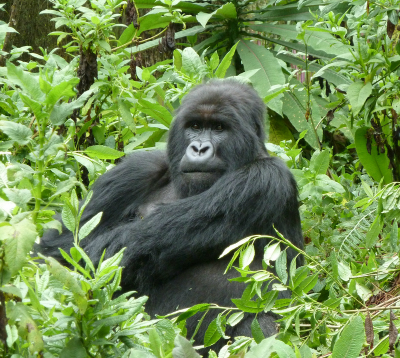 Ugenda’s group of mountain gorillas is known to the Dian Fossey Gorilla Fund field staff as calm and stable, with all of the group members generally getting along harmoniously. So it was somewhat surprising when on Aug. 10, the field staff observed the subordinate silverback, 17-year-old Wageni, pass dominant Ugenda in a brief attempt to lead the group’s movements. 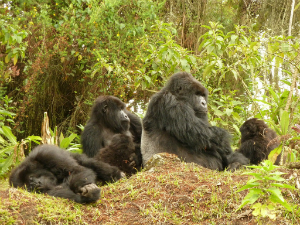 Indeed, Wageni’s attempt to pass Ugenda recently was successful, though Fossey Fund field staff have some doubts about Wageni’s ability or desire to actually attempt to wrest dominance from Ugenda at this time. At 17, Wageni is still very young to take on the responsibility of protecting and leading his own group. Moreover, he usually rests and feeds at a certain distance from most of the other group members including the females, and female allegiances tend to play a role in changes of dominance.
Given the potential for competition among males, one might wonder why mountain gorillas ever live in multi-male groups. While it is true that silverbacks face less competition for females when they live in single-male groups, multi-male groups offer more protection for females and infants during interactions with other groups. The subordinate silverbacks will usually provide assistance to the dominant silverback in retaining females and preventing the other group’s silverbacks from killing infants. There can sometimes be mating opportunities for a subordinate silverback as well, if he is careful about which females he chooses and when he decides to copulate. 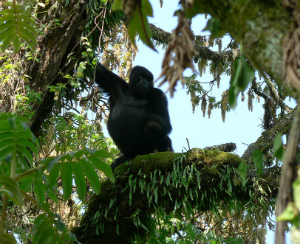 The most famous of these shifts occurred in Beetsme’s group, when dominant silverback Titus was finally deposed after a long challenge by his son Kuryama. Once he was the dominant silverback of his own group, Kuryama himself was eventually challenged by Kirahure, who became dominant in Kuryama’s group. Another successful shift occurred in Ntambara’s group when his younger brother Ugutsinda began to challenge Ntambara in 2010, and finally became dominant in 2011. Ntambara, however, remains in the group in the subordinate role.

Fossey Fund staff can now only watch and wait to see how things unfold in Ugenda’s group and whether Wageni will continue to challenge Ugenda. The Fossey Fund has been monitoring Wageni since birth, and staff and researchers say that although they did not expect Wageni’s passing behavior, in some ways it fits in with what we know about his temperament. Vecellio says it is possible he was just stretching his wings and trying to pass Ugenda for the sake of the experience. Wageni is known for being active and bold — the kind of personality who might try passing Ugenda just to see if he could. Now that he has succeeded once he may be satisfied for the time being, or he may feel emboldened to continue challenging Ugenda. In any case, Wageni’s behavior caught our field staff’s attention, and made him a gorilla to watch in the coming months.