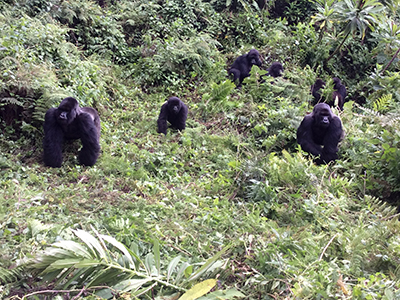 Interactions among mountain gorilla groups are always interesting to watch, since they can lead to group changes and even injuries, in addition to providing us with information about gorilla behavior. Our trackers and research assistants take detailed notes, photographs and other information, and produce reports on all interactions we witness.

One interaction that our staff witnessed recently, on May 25, involved lots of displays and aggressive moves, and lasted for many hours. It took places between one of the groups we monitor daily, called Giraneza’s group, and a group that is monitored by the park tourism authorities, called Umubano’s group.

Umubano’s group happened to be ranging in an area where it does not usually go, and which is more normally used by groups that we monitor. In the morning, one female from Umubano group joined Giraneza’s group and this led to a lot of displaying by the dominant silverbacks from each group – Giraneza and Umubano. Shortly, the other gorillas in the groups became involved as well and that’s when things got serious.

At one point, Giraneza charged many of the males from the other group all by himself and then a real fight started when one of the Umubano males came too close, with Giraneza biting him on the neck. Another physical fight occurred between Giraneza and yet another male, with the two fighting each other while standing on two legs, as the other gorillas screamed.

Luckily, the females in Giraneza’s group stayed behind, including two who have infants, and no injuries occurred in this group. Giraneza is known for being a very strong silverback and several of his encounters with other silverbacks in the past have led to their deaths, so staff are always very careful and concerned when witnessing him during interactions.