Watching Bishushwe: From One Group to Another

Bishushwe, a 21-year-old adult female mountain gorilla, recently left Pablo’s group, one of the mountain gorilla groups we monitor from the Karisoke Research Center. After almost two months of traveling with other groups and silverbacks she finally joined her current group, led by silverback Shinda, where it looks like she may stay. 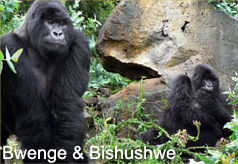 Bishushwe left Pablo's group on Oct. 18, 2006, with her 5-month-old infant, silverback Turatsinze, and blackback Musilikale. The four gorillas traveled together for almost 20 days. The relationship between Bishushwe and Turatsinze was very tense during this period. Turatsinze was continuously asserting his dominance, displaying and directing aggression at Bishushwe. It was not a happy match.

After nearly three weeks, Bishushwe and her infant were found traveling separately from the two males and she remained alone with her infant for almost one week. Then she was observed in Beetsme's group, a third group that we monitor from Karisoke. The welcome from Beetsme's group was not warm and the silverbacks in this group killed her infant within a few hours. Bishushwe also was the focus of aggression from many other members of Beetsme's group.

After a few days, the situation calmed down and Bishuswe remained close to Bwenge, one of the subordinate silverbacks in the group. Bwenge and Bishushwe traveled in close proximity for the next 20 days remaining at the periphery of Beetsme's group. Bwenge was very interested in Bishushwe and tried to prevent any approaches from other males. 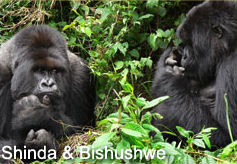 Eventually, Bwenge and Bishuswe left Beetsme's group to travel alone on Nov. 25, 2006. Unfortunately for Bishushwe, this also did not seem to be a happy match.

To their surprise on Dec.8 2006, Karisoke trackers found Bishushwe in Shinda's group! A few days later Bwenge was once again back in Beetsme's group.

In Shinda's group, it seems that Bishushwe has finally settled in. Since the first day of her transfer she has spent most of her time in close contact with the group's dominant silverback, Shinda. Shinda has been paying close attention to his new female, following her and protecting her from any aggression attempts from other silverbacks and females in the group. Bishsushwe also now seems to be very comfortable with her new friend, often approaching him for long sessions of resting together.

Bishushwe left behind in Pablo’s group her 4-year-old juvenile male, Kubona, and an 8-year-old blackback, Kubaha. The reason for Bishushwe’s initial transfer from Pablo's group is unclear. It is unusual for a female with a young infant to transfer between groups because of the risk of infanticide from extra-group males. Bishushwe's shy temperament led her to live always at the edge of the group, often avoiding social interactions except with her own offspring. Perhaps one day she was left behind the group and Turatsinze took the opportunity to attempt to form his own group. He was unsuccessful, however, and is now ranging as a lone silverback.