Bamboo is a key food plant for many animals that live in Rwanda’s Volcanoes National Park, including the mountain gorillas. It’s so important that the Fossey Fund monitors bamboo growth each year, to understand the impact on wildlife and to help predict its distribution. For the past several years, we have conducted studies using almost 100 plots in gorilla and golden monkey range, to quantify and compare the production and re-generation of bamboo shoots each season. 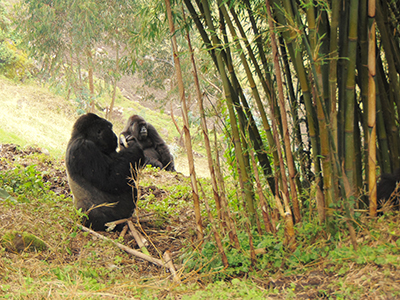 The bamboo zone of the forest is located at the lowest altitude of the park, near the park boundaries and adjacent agricultural plots used by local communities. And since bamboo is a favorite among the mountain gorillas, when bamboo shoots are in season, the gorillas move down to this lower edge of the park, closer to human communities, and sometimes even range outside the park, where they may eat and damage agricultural crops, especially the eucalyptus trees that are grown by the local population for a variety of uses.

Bamboo shoots are the most preferred part

Gorillas prefer bamboo shoots (as opposed to other parts of the plant) most of all, and during bamboo shoot season, this may account for up to 90 percent of their diet! Thus, we are very interested in how each bamboo season unfolds, since a good season may bring more gorillas out of the park, while a poor bamboo season may have other effects.

This year’s first rainy period has turned out to be a very poor bamboo season. “This year’s bamboo shoots are less than 1/10th of what we saw last year,” says Deogratias Tuyisingize, who oversees our bamboo monitoring, as manager of the biodiversity program at our Karisoke Research Center.

Gorilla program manager Veronica Vecellio notes that field staff have been expecting gorilla groups to move downhill to the bamboo zone since the rainy season started in March. However, only a few attempts were made by the gorilla groups, checking lower areas to see if there were any bamboo shoots, but then moving back to higher-altitude feeding after a few hours. Higher altitudes provide more evenly distributed and yearlong vegetation sources.

“How this decreased bamboo production will reflect in the gorillas' ranging and demography is unknown,” says Vecellio. “Since they have mainly remained stationary in the high-altitude areas, there may be different nutritional intake and different patterns of interaction among groups.”

There have also been dramatically fewer incidences of gorillas ranging outside of the park. Only 10 occurrences were recorded this year, down from 66 times during the same months last year, when the bamboo season was much better.

The availability of bamboo also affects other animals in the forest, such as the golden monkeys, which we also monitor. “The golden monkey diet has changed this year due to the lack of shoots,” says Tuyisingize. “Normally bamboo represents 70 percent of their diet, including leaves and shoots. Now they are forced to look for other food and diversify their diet. This is affecting their ranging distribution, as they are expanding their home range in order to look for other food.”

Overall, we hope that this year’s unusual bamboo season is just a natural vegetation cycle, and that bamboo shoots will become more abundant again during the next rainy season.