Since we’ve announced the birth of Isaro’s twins earlier this week, we’ve received some great questions about twins among mountain gorillas. Because twins are so rare, we don’t yet have all the data needed to fully answer every question, but here is some interesting information that we have observed:

How often are twins born?

Of the more than 270 births that have occurred in the Karisoke gorilla groups over the last 50 years, only three have involved twins. The first set of twins we observed were born in 1986 and only survived nine days, and those born in 2008 died the day they were born as a result of infanticide. Among the groups the Rwanda Development Board (RDB) monitors, there have also been three sets of twins born and two sets that have survived. 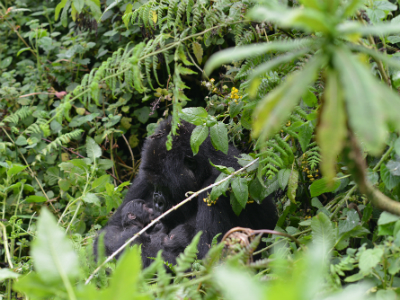 What is the chance of survival for twins?

We don’t have enough data to know if there is a statistically different rate of survival between twins and single-infant births. However, we do know that roughly 25% of single infants die during their first year of life and we would expect the rate for twins to be just as high if not higher. Luckily, Isaro is a successful mother who has previously raised two offspring, and so we have high hopes!

What are the challenges a gorilla mother faces?

Gorilla mothers are completely responsible for infant care at this stage and even despite the increased energetic demands of nursing twins, she will not allow other group members to hold or assist in any other way. As the infants age, other group members or the twins’ siblings might help carry them, but this likely will not happen until after they reach one year of age. One of Isaro’s biggest challenges in the next few weeks will be keeping up with the group, as mothers usually use their arms to support infants until they are strong enough to grasp on tightly by themselves. So, with twins, Isaro may need to use both arms to make sure the infants are secure, which could make walking difficult. Another significant challenge will be the weather — with the long rainy season approaching, the damp conditions and cold temperatures might put the twins at risk.