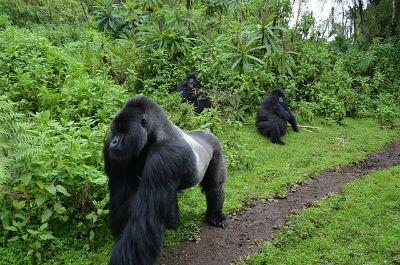 It is a crucial task to have Fossey Fund trackers in the field monitoring our gorillas 365 days a year. Our constant presence decreases the risk of threats, such as poaching or disease outbreaks, and allows us to conduct research to further learn how to protect these endangered creatures. However, even regularly followed, habituated groups sometimes migrate beyond the borders of Volcanoes National Park into the Democratic Republic of Congo (DRC), where our Rwandan trackers cannot go.
Luckily, dispersed groups that go beyond our tracking range often return. Gushimira’s group crossed the border into Congo on Aug. 28 but returned on Sept. 30, when they were spotted near the top of Mt. Visoke. This small group formed in 2013 and had been in and out of monitoring range most of the summer, going out of our range in mid-June and briefly reappearing during an interaction in late July before crossing the border at the end of August. All five members of the group—one infant, three females and one silverback—were reported to be in good health.

We had a similar experience with another small and recently formed group, called the Mafunzo group. They “disappeared” from our tracking efforts on Sept. 7 but returned on Oct. 1. Recently formed groups are notoriously harder to track because they are typically smaller in size and leave fewer visible traces behind than larger groups. They also tend to have a bigger home range, traveling wide distances, both to enlarge their group and to avoid conflicts with others.

Currently, though, we are still looking for Kuryama’s group, which has not been located since April 30. Before they crossed over the Congolese border of the park, this group had an interaction with recently returned Gushimira’s group. Kuryama’s group is one of our longest-monitored groups, so it is particularly worrisome to lose track of them, and Fossey Fund staff continue to patrol the area along the border in hopes of finding fresh traces.

While we are always elated to have groups return, the issue of gorillas crossing borders where we currently cannot follow will continue to be problematic. Until we are able to find a solution to this, a dedicated team of trackers will continue to search for the dispersed groups.