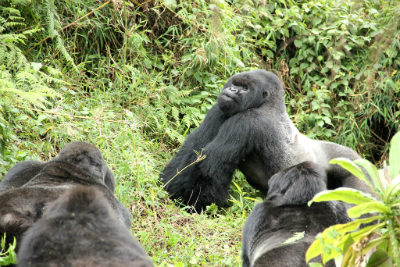 For many years, the Dian Fossey Gorilla Fund field staff monitored three large, multi-male mountain gorilla groups and only occasionally noted the movements of several “lone silverbacks” – mature males who had left their competitive natal groups to travel alone and attempt to attract females from other groups. These “bachelor” males are difficult to track and rarely succeeded in forming their own groups – until recently.

Lone silverback Inshuti was the first lone silverback in recent years to be observed forming a group, when he won a couple of females away from Pablo’s group, the largest of the three then monitored by the Fossey Fund. For about five years his accomplishment seemed unique. But the big groups were breaking up, and the research gorillas’ social arrangements became more complicated and fluid. In early 2012, Inshuti received a dose of his own medicine when lone silverback Giraneza took advantage of Inshuti’s weakened state after an interaction with two other lone silverbacks and stole two of Inshuti’s females, leaving him with only one. Gorilla groups consisting of only two members are unusual.

The following year, lone silverback Gushimira challenged dominant silverback Ugenda, who had led a medium-size group for several years. Ugenda had already suffered the loss of some females to other groups, though three remained at his side. Gushimira managed to defend himself against both Ugenda and his second-in-command silverback Wageni, and succeeded in making off with all three of Ugenda’s females. The wounded Ugenda and Wageni were left in charge of just one sub-adult male, two juveniles and an infant who had been left behind by his mother. The field staff were surprised by this incident, as they had last seen Gushimira a year and a half earlier in the company of two other males who had left Pablo’s group with him, and the area where he encountered Ugenda’s group is not within the Pablo group’s range.

Gushimira’s newly formed group did not stabilize initially. One day following their defection from Ugenda, the females left Gushimira while he again interacted with Ugenda and Wageni. Once back with Ugenda, all the mothers were rejoined by their respective offspring. Ugenda and Wageni rallied their strength despite their wounds and chased Gushimira away. The females joined in the chase, sometimes participating in charging and screaming at Gushimira.

However, this reconciliation proved temporary. Gushimira again confronted Ugenda and Wageni the next day, and succeeded in taking back the three females after a long interaction, leaving Ugenda and Wageni in even worse shape than before, with new wounds. Gushimira was observed to have suffered only one minor wound during all the interactions. Nevertheless, two days later the drama resumed, with the females this time leading Gushimira’s group toward Ugenda’s group, precipitating another interaction, and finally rejoining Ugenda for a second time. The infant climbed on his mother’s back and the juveniles stayed close to their mothers.

This, too, proved temporary, and by the end of the day the females were with Gushimira again. The field staff decided to recognize Gushimira’s group and reorganize to assign trackers to follow them on a regular basis.

No one really knows what the gorillas’ next move will be, or what motivated their unusual behavior. Field staff wondered why Gushimira didn’t move a safe distance away from Ugenda’s group as soon as he had control of the females, or why the females rejoined Ugenda twice after spending a few hours or days with Gushimira.

Gorilla behavior is never entirely predictable, and presents behavioral researchers with much food for thought. Perhaps as the Fossey Fund continues its long-term observations more patterns will emerge.