Who's my daddy? For gorillas, it doesn't matter

Every day, just like humans, gorillas have to make choices about whom they socialize with. Also like humans, they usually (though not always) have the strongest relationships with their relatives. Many of the groups the Karisoke Research Center has monitored for the past 15 years have been very large and contained more than one silverback. This creates an interesting problem: when infants have multiple potential fathers, how do they figure out who dad is?

The gorillas monitored by Karisoke have been followed for some 47 years, which means we can collect very detailed data on their behavior and social relationships, plus fecal samples that allow us to figure out genetic paternity. By matching the paternity information to the gorillas’ behavior patterns, we can determine whether silverbacks and infants are more likely to socialize with one another if the silverback is the infant’s father. 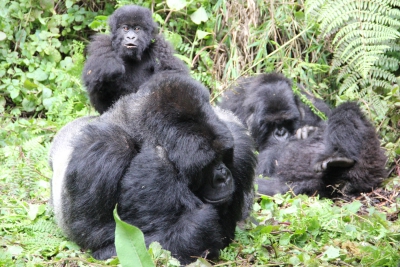 It turns out they’re not! Infants’ and silverbacks’ preferences for one another seem to be based on the silverbacks’ dominance rank, not genetic paternity. Dominance hierarchies are strong among silverbacks. Typically, alpha (top-ranking) males sire the most infants in a group, but males who are lower on the totem pole also father a surprising number (in one of our samples, about 60 percent of infants). We found no signs in their behavior that silverbacks or infants were using paternity to decide whom to socialize with.

Currently, we’re working on figuring out what hormones are associated with silverbacks’ parenting behaviors. Like humans, gorillas show a tremendous amount of individual variation. Some males are very paternal, playing with and grooming infants. Others, while tolerant, show little active interest. We hope to understand more about the mechanisms that control parenting behavior under different social conditions.

Support from the Wenner-Gren Foundation, National Science Foundation, and LSB Leakey Foundation allows us to integrate hormonal data collected from fecal and urine samples with our genetic paternity and behavior data. Together these will provide important insights on how and why social relationships evolved in primates — both non-human and human!

Submitted by Stacy Rosenbaum, Ph.D., NSF postdoctoral fellow at the University of Chicago and Lincoln Park Zoo. Dr. Rosenbaum was a research assistant at the Fossey Fund's Karisoke Research Center in 2003-2004 and reutrned in 2011-2012 to collect date for her doctoral dissertation.