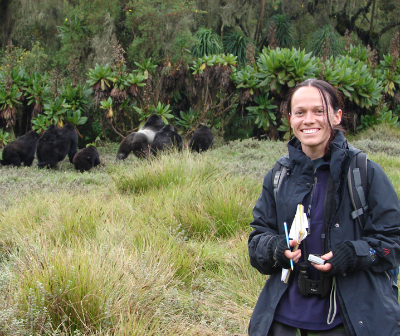 Winnie Eckardt, Ph.D., Judith Harris and Robert Singer, M.D., Postdoctoral Fellow, has spent the last two months at the Fossey Fund’s Karisoke™ Research Center in Rwanda collecting data for a study of stress in mountain gorillas. Her study is expected to yield information of great importance to the gorillas’ chance of survival.

Why study stress in gorillas?

While the monitored great ape populations of Africa and Asia have drastically declined over the last several decades, the Virunga’s mountain gorillas have been busy multiplying. In fact, research shows that Dr. Dian Fossey’s “active conservation” initiative and its continuation by the Fossey Fund has played a critical role in helping the Virunga mountain gorilla population increase from just 242 individuals to over 480 gorillas in the last 40 years.

While this is encouraging news, primatologists are aware that the gorillas’ situation is more complicated than a simple population increase would indicate. As Fossey Fund scientist Tara Stoinski, Ph.D., reminds us, “we must remember that the population remains critically small and its existence is still very fragile… it faces numerous sources of stress that individually are highly detrimental and in combination could create the ‘perfect storm’ that pushes the population to extinction.”

For example, the gorillas live in a small island of forest surrounded by human settlements. As the gorillas’ population has increased, so has their density. One potentially stressful consequence of this is a significant increase in the frequency of interactions between gorilla groups, which can be violent and result in serious injury or death. In addition, some gorilla groups spend part of the year ranging at very high elevations, where they must endure colder temperatures, increased rainfall and a decrease in food sources.

The mountain gorillas’ stress levels could also be influenced by the presence of humans. Over 70 percent of the population is visited daily by either researchers or tourists, but we know little about the effects of these visits on gorilla behavior and stress. Because stress and health are often linked, it is important to evaluate sources of stress in the gorillas’ environment and how they influence the health of the population. Such data are crucial for developing effective conservation strategies for the population. Thus, a massive research initiative was conceived. 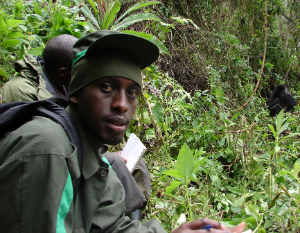 Stoinski, the Fossey Fund’s McGrath Chair of Conservation and Science, is responsible for designing and overseeing this innovative study. She says that this will be “the most comprehensive study of gorilla behavior and hormones to date” and “will significantly improve our understanding of how a number of factors in the gorillas’ environment influence their behavior, stress and ultimately health." Another important objective of this study is to contribute to capacity building in the country, so Rwandans Jean Pierre Samedi Mucyo and Rose Umuhoza were trained to fill the research assistant and laboratory positions, respectively.

Eckardt has worked at Karisoke off and on since 2004 and is extremely well suited to carry out the stress study, which requires overseeing many research assistants and trackers and collecting and analyzing three different types of data: hormonal, behavioral and pathogens.

Her day begins just before the sun rises on Rwanda’s hillsides. By 6:50 a.m. she is in the back of the white Karisoke Land Rover en route to the trackers’ house just outside of Bisate village. The teams assemble according to their designated gorilla group and make their way to the park border. The advance team of trackers has already trekked into the park to pinpoint the gorillas’ exact location, which they radio to the research team.

The Fossey Fund currently monitors nine groups of gorillas that range in a huge expanse of land between Mount Visoke and Mount Karisimbi. The strenuous hike up the volcanoes can last as long as four hours before the team reaches Pablo’s group and some of the other gorillas high up on the mountains.

Once data collection begins, Eckardt will carry out a series of “follows” where she will select a specific individual to observe for about 30 minutes, watching his/her behavior closely, recording every subtle scratch or yawn (both are behaviors that can indicate stress). By recording behavior during both stressful and non-stressful times the researchers are able to evaluate the effect of stress-inducing events and identify the various stress indicators. 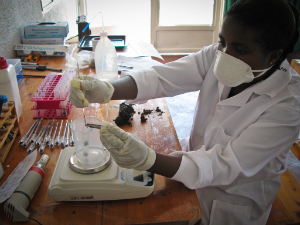 While in the field, Winnie and her team also collect fecal samples, which is a non-invasive method for gaining valuable data on what is happening inside the gorillas with respect to stress and health. After returning from the forest in the late afternoon, the team will then spend hours in the laboratory meticulously preserving and storing the fecal samples, which will be sent to laboratories across the globe for the relevant analyses, and entering behavior data. And then a few hours of sleep and the cycle starts again.

Further down the road

Many months of data and field samples remain to be collected and analyzed. Eckardt plans to dedicate the entire next year to the fieldwork. Having been back in the field for only two months, Eckardt says she is “shocked that there have already been two significant [stress-inducing] incidents” among the research gorilla groups. The first occurred when a female (Ntobo) became very ill and required a medical intervention, and the second happened shortly after, when a lone silverback moved in on Ugenda’s group, seriously injuring infant Igitangaza. Unfortunately, we are sure to see more such incidents in the coming months.

The results of the stress study will provide important scientific information which can be used to aid the Rwandan government and park authorities in optimizing gorilla conservation policies. The findings can also be applied to other great ape field sites and will help to evaluate the current approach to primate conservation in general. By training Rwanda’s younger generation in field science, data collection and analysis, the Fossey Fund can also contribute to capacity building and ensure that the knowledge stays in the country. It is the hope of all those involved that it is also here that Rwanda’s future ambassadors for the mountain gorillas are born.
Submitted by Jessica Burbridge, Fossey Fund Field Communications Officer