"You Bet This Beats the Amazon!"

I am Joseph Karama, the Karisoke Research Center's Conservation Education Program Manager. I make conservation education available to primary and secondary students and other members of the communities near Volcanoes National Park in Rwanda, and to visiting university students. For my first blog I am writing about one outstanding experience I was able to provide. 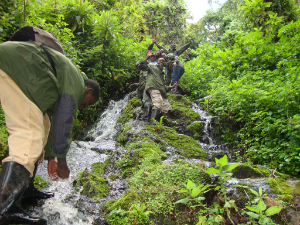 The words in the title belong to Festus Maniriho, an assistant lecturer accompanying students from Rwanda's Higher Institute of Agriculture and Animal Husbandry (ISAE) on a field trip to the top of Bisoke, one of five volcanoes in Volcanoes National Park. Maniriho was surprised by the density of the vegetation: luscious leaves everywhere dripping with water, cool humidity and thick mists, and very soggy ground with mud up to your knees in places. Although ISAE is located less than four kilometers from the park boundary, surprisingly the majority of the students and faculty have never visited the park. That should tell you something about the rest of the Rwandan population. Every year when I take a small group of local community members to see the gorillas, I get so many oohs! and wows! not only because they are amazed by the natural beauty on display but especially because for most it's their first time to see the gorillas.

The occasion I am writing about today however is when the fourth year Forestry and Natural Resource Management class of ISAE visited the park for a two-day "Introduction to Mountain Gorilla Conservation" course hosted by the Karisoke Research Center. The students get a chance to see mountain gorillas in their natural habitat and observe their behavior, and they hike one of the volcanoes to study its various vegetation zones. They also view PowerPoint presentations about the behavior and ecology of the mountain gorilla, conservation of Volcanoes National Park and the role of the Karisoke Research Center.

Afterwards one of the students, Theobald Twamukwaya, had this to say:

"Setting out [on the Bisoke Volcano hike] I felt it was just a nature walk, but then entering the park suddenly brought a special feeling: the air, the sounds, etc. You can see plants in books but it's not the same as touching and smelling them, you never forget them. When we reached the top of the volcano it was the most special feeling; some said they were nearer to God and so asked us to be quiet. You hear about volcanoes and you always think of fire or smoke but then you get there and it's freezing and misty, there is the most beautiful lake with crystal clear water. It was amazing and surprising at the same time.

"What I wish to tell other students in this country is that they need to come to Volcanoes Park and see for themselves what a natural heritage our country possesses. Watching gorillas closely and looking at their behavior leaves you wanting to think about your life and the role you should play in making the earth a better place for all life."