We are sad to report that 3-year-old male mountain gorilla Akarusho has passed away, due to a variety of wounds suffered since he left his mother’s group on July 10. A medical intervention with the Mountain Gorilla Veterinary Project was conducted on Sept. 10. 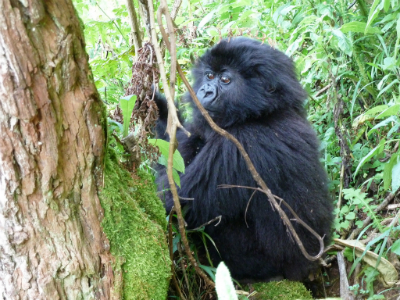 On Sept. 9, our trackers at the Karisoke Research Center had reported that Akarusho’s condition had deteriorated. This was a sudden turn of events because until then, his health had appeared to be improving and he was feeding normally, despite his wounds. Veterinarians Dr. Jean-Felix Kinani of the Mountain Gorilla Veterinary Project and Dr. Elizabeth Nyirakaragire of the Rwandan Development Board returned with Karisoke researcher Winnie Eckardt, Ph.D. and our trackers today to again assess the infant's condition and intervene if necessary.

Akarusho was found alone, about 30 meters from one of the gorilla groups, but too weak to follow them. By the time the team arrived, the group was already about 200 meters away. Akarusho was underneath a hagenia tree, which offered him shelter from the rain, but he showed signs of being cold and in severe pain. He was not moving at all and was whimpering periodically. The decision was made to intervene, to assess the infant's wounds up close and provide care. The team found that the youngsters wounds covered many parts of his body, including head, face, nose, both hands, and foot.

We suspect that the sudden severity of his condition might have been precipitated by heavy rains on Saturday night and the fact that he had been moving quite a bit. Moreover, the vegetation is thick, so it was hard for anyone to visually assess the extent of the wounds and monitor them until the intervention. Until yesterday afternoon, he had been feeding normally and his condition did not seem to be worsening.

The veterinarians sedated Akarusho and administered antibiotics, anti-inflammatories and some fluids, and dressed his wounds. It took quite a long time for Akarusho to wake up again from sedation, although this is not uncommon for young gorillas. They put him on a plastic sheet which is used during interventions, and tried to cover him with it to help keep him dry and warm.

In addition, a special team was organized stay with him overnight in the forest, but given his condition he was not expected to survive the night. Unfortunately, our worst fears were realized and he passed away during the evening of Sept. 10.