Another Young Gorilla Rescued from Snare 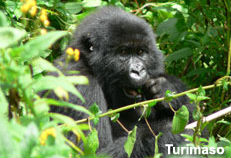 Six-year-old female mountain gorilla Turimaso recently became the fourth young gorilla among those we monitor in Rwanda to be trapped by a poacher’s snare during 2009. Fortunately, Karisoke Research Center trackers were able to rescue her, as they had the others. Although poachers set snares for other animals such as antelopes, gorillas can get caught and suffer injuries from the tight ropes. Karisoke’s anti-poaching team found and destroyed 873 such snares during the first 11 months of 2009.

When Karisoke trackers trying to locate Pablo’s gorilla group on the morning of Dec. 17 heard some of the males beating their chests, they knew something was wrong. They rushed to the group to find Turimaso caught in the snare. Two young silverbacks were close by, while the rest of the group was feeding some 30 meters away. The trackers realized that they needed to free Turimaso from the snare quickly, as the rope was very tight around her wrist. The rope was cut, and Turimaso ran directly to join her group. However, part of the snare remained on her wrist, with about 20 centimeters of trailing rope.

Our staff then decided to carry out an intervention the next day to remove the rest of the snare before it could cause more damage, as Turimaso’s arm was already swollen. The intervention was expected to be anything but easy for many reasons: Pablo's group is notoriously difficult for interventions given the large size of the group, which includes many adult males. In addition, Turimaso has been one of the youngsters who like to spend their time in close proximity to the dominant silverback, Cantsbee, since her mother transferred to another group in 2007. We were expecting the intervention to be further complicated by the location of the group, as they were ranging in bamboo, where visibility is very limited and there could be more snares. 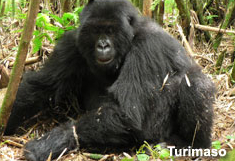 To ensure that the intervention went well, experienced trackers came in to work on their day off to support some of the newer trackers on the team that follows Pablo’s group. A meeting with the veterinarians from the Mountain Gorilla Veterinary Project (MGVP) and the law enforcement warden for Volcanoes National Park was organized the same day to discuss and plan the intervention. A team of 11 people including Karisoke staff, veterinarians and a representative of the park authority (Rwanda Development Board, formerly ORTPN) was assembled.

The plan was as follows. First, a small team would try to locate Turimaso and make a quick assessment of the situation on which to base a final decision. Then this team would pull back to give the vets time to get prepared while a tracker stayed with Turimaso. When everything was ready, the veterinarians and two of the most experienced trackers would come back to Pablo’s group and wait for a good opportunity to dart Turimaso, while keeping constant radio contact with a second team that would be ready to intervene in case the rest of the gorillas were aggressive.

The initial step was met by a series of screams. The first gorilla we saw was Turimaso, chased by a group of females and juveniles, presumably because of the snare around her wrist and the trailing rope. It took staff around 40 minutes to find her again, because she had fallen behind the group. At this point it looked as though an intervention would not be possible, but given the fact that the snare and the rope were causing stress to the group and that Turimaso was at the receiving end of many aggressions, we decided to go ahead with the intervention.

While the veterinarians were getting ready and discussing details, we again heard many loud screams from the group, for about two minutes. Again, Turimaso was being aggressed as she tried to get close to Cantsbee, presumably for protection from the other gorillas. After this failed attempt she was very exhausted and she separated from the group, which provided a good opportunity for the vet team to dart her, when no other gorilla was around. After Turimaso was anesthetized, the second team then joined in to provide protection, in case some gorillas were left behind nearby or some decided to investigate what was happening!

The veterinarians successfully removed the snare and treated Turimaso for many fresh wounds on her right hand that she had received while trying to protect herself, as well as a snare wound on the left wrist, a puncture wound on her left forearm and a deep bite wound on her left elbow. She was also given a shot of antibiotics. Karisoke trackers assisted the vet team during the whole intervention to monitor Turimaso and collect various samples. After she was given a drug to counteract the anesthetic, we continued to monitor Turimaso as she woke up, to make sure she was going in the right direction toward her group, who very fortunately were resting 50 meters away. When she made it to the group, still weak, she received some aggressions from some of the gorillas, but when silverback Cantsbee came all the aggressions stopped. She was able to feed, and remained close to Cantsbee.

While the intervention was going on, an anti-poaching team found 15 snares near Pablo’s group. The following day, another 17 snares were found in the same area, where Pablo’s and Kuryama’s group were ranging. Some of those snares were found among the gorillas. Extensive patrols in that area were organized in collaboration with park authority staff, community members, and military personnel, to take place over the following two weeks.

During the next few days, we continued to monitor Turimaso for the wound on her left elbow and a full recovery was made.