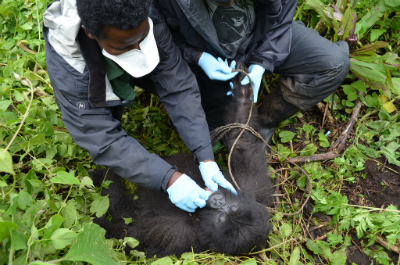 One of the Dian Fossey Gorilla Fund’s ambassador “Adopt” gorillas for 2013-14 was caught in a snare in December, the latest in a series of challenges for this young gorilla named Sabato. He was born in March 2010 but in Feb. 2013, before he had even turned 3 years old, his mother (Kurudi), along with several other females, transferred to another group after some intense interactions with a lone silverback, leaving Sabato and other older offspring behind.

This meant an abrupt and early weaning period for little Sabato, though he at least has had the good protection skills of his father, silverback Ugenda, and second-ranking silverback Wageni, as well as the companionship of his older brother, 7-year-old Iterambere. Sabato even shares a night nest with Ugenda.

On Dec. 25, Sabato faced yet another traumatic experience when he became caught in a poacher’s snare. These snares are set for other animals in the forest, such as antelopes, but it is easy for gorillas to become ensnared as well. Luckily, Fossey Fund trackers found him the same day, after the snare’s rope had already been broken away from the branch (which would have required lots of pulling by him and the other gorillas). However, this left a piece of rope wrapped very tightly around his right wrist, which needed to be removed. 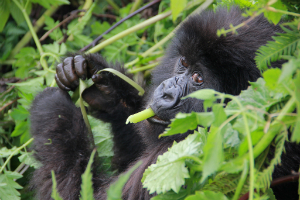 In cases like this, the Fossey Fund confers with Rwanda’s park management: the Rwanda Development Board (RDB), and veterinarians with Gorilla Doctors, to discuss and plan a medical intervention. As a result, an intervention was planned for the next day, and was successfully carried out. While Fossey Fund trackers controlled the silverbacks and other group members, veterinarians anesthetized young Sabato, removed the rope, checked for wounds, administered antibiotics and painkillers to help with healing, and took blood samples and swabs for future research and testing. He recovered quickly from the anesthesia and Fossey Fund trackers have reported that he and the group seem to be back to normal ever since.

The Fossey Fund will continue to monitor Sabato and his group, as always. We are grateful to Gorilla Doctors and RDB for their excellent collaboration in this successful intervention.