Each group of mountain gorillas the Fossey Fund protects at the Karisoke Research Center has a team of trackers designated to monitor them every day. During the past month, an entire team of at least four trackers has been tracking a young male gorilla, named Ntaribi, who has been traveling alone in recent weeks. 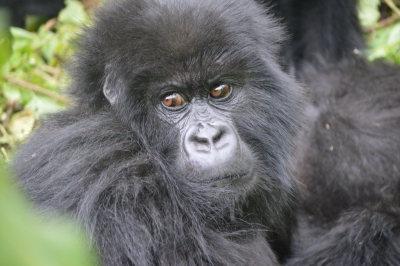 Ntaribi, who turned 7 on Dec. 18, has been traveling alone since Nov. 6, after splitting from his previous group. This atypical split is associated with the premature death of silverback Bwenge, who led Ntaribi’s previous group. After Bwenge died on Oct. 1, Ntaribi interacted with a lone silverback and briefly disappeared from our tracking, but rejoined the remnants of Bwenge’s group on Oct. 28.

During that time, Bwenge’s group was led by elder female Maggie, until the group merged with Ugenda’s group on Oct. 31. Around this time, silverback Wageni (from Ugenda’s group) appeared in the group and showed physical aggression toward Ntaribi, injuring his right leg and causing him to limp. Given this general stress and the instability of the situation, it seems likely that Ntaribi’s current lone travel is partially due to fear of the silverbacks from Ugenda’s group.

Every day our trackers go into the forest to locate the young gorilla but we are not successful every day in finding him. From Nov. 24 to Dec. 6, Ntaribi was “missing.” When he was seen again after that, he was no longer limping but was traveling far from other groups.

We hope Ntaribi’s situation becomes more stable, as he is too young to be traveling alone. Until it does, the Fossey Fund trackers will continue to look for him every day.