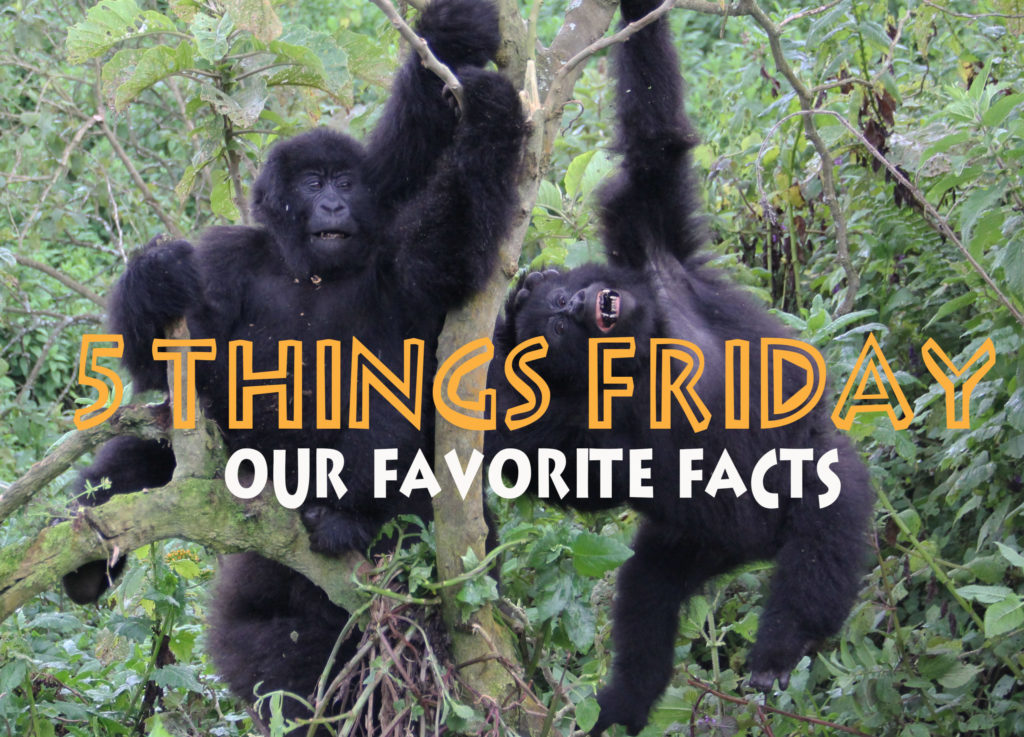 Non-human primates don’t have the same speaking abilities we do to communicate thoughts and ideas. However, this doesn’t mean that gorillas can’t learn from each other! Studying exactly how gorillas learn is difficult, but research has shown that social learning, which is learning from others, can play an important role. Gorillas have even been shown to learn through basic forms of imitation (e.g. copying specific body motions). One area of potential social learning in gorillas is the recognition of snares. It could be that gorillas learn that snares are dangerous without ever being caught in one by watching the reaction of experienced group members.

Liz Favorite Fact 2 – Episode 33, Dian Fossey: Dian took initiative to get the career that she wanted

In 1963, Dian took a leave from her physical therapy job and traveled to Africa to talk to Louis Leakey, a paleontologist that gave Jane Goodall her start working with chimpanzees. Without an invitation, Fossey showed up at Leakey’s dig site in hopes that he would help her start a career in studying gorillas. When Dian arrived at Leakey’s dig site, she fell and broke her ankle AND one of his excavated fossils! Three years later, Leakey contacted her and asked her to study mountain gorillas on a long-term research project. The rest is history!

ever-growing database, we have recently completed some very exciting photogrammetry studies! Photogrammetry is the science of taking measurements from photographs. With this

technology, we can measure the size of gorillas as well as growth patterns! One study looked at what factors influence reproductive success in male gorillas. We came to the conclusion that sagittal crest height and back breadth are the greatest predictors of reproductive success.

Using photogrammetry methods, we have also discovered that males and females grow the

same way until the age of 8. After that, growth patterns between the sexes are different. We’ve also learned that female gorillas stop growing around the age of 12, while male gorillas continue growing until they are about 15.

Liz Favorite Fact 4 – Episode 1, Mountain Gorillas: Mountain gorillas are the only subspecies of gorilla whose population is increasing.

While all other populations of great apes (except humans) are decreasing in size, the mountain gorilla population is actually increasing! Mountain gorilla numbers have consistently risen over the last 30 years. Gorilla census information is split between the Virunga population (living in the Virunga Massif) and the Bwindi population (living in Bwindi Impenetrable National Park). At the lowest point, the Virunga population dropped to approximately 250 individuals in the early 1980s, classifying them as critically endangered on the IUCN Red List. Today, the same population stands just over 600 individuals! The Bwindi population is increasing as well and is currently at 400 individuals. Due to this consistent increase, mountain gorillas have recently been reclassified from critically endangered to endangered, which is one step further away from extinction.  This incredible population recovery is a result of the conservation leadership of the countries where mountain gorillas are found as well as the work of conservation groups like the Dian Fossey Gorilla Fund and its team of trackers, researchers, staff, and donors!

Much like people, gorillas definitely have emotions, and they can feel distress. Gorillas may cry out as vocalizations, but they actually don’t produce tears like humans do when we cry. Gorillas produce tears in order to lubricate their eyes, but tear production as a form of distress is completely unique to humans within the primate species!

While gorillas are social creatures, it’s normal for a silverback to live a solitary life. Gorilla groups typically consist of a single dominant silverback with multiple females— the one exception is mountain gorillas, where multi-male groups make up about 40% of the population. As they have a 50:50 sex ratio at birth, this means not every male will have a female partner.  Once males leave their birth groups, they usually remain solitary until they are able to form a group of their own or join a bachelor group if one is around.

If you compare a human and a gorilla skull, you might notice that the area underneath the mouth of the human sticks out and away from the skull, while the area under the gorilla mouth actually slopes back towards the skull. This slope may look strange to you, but it’s far more common than you think! In fact, humans are the only animals that we know of that have the bony protrusion beneath their mouths known as the chin. Researchers are still trying to understand why that is! (Pampush & Daegling, 2016).

Gorillas consume about 200 different species of plants throughout the year but fewer than 10 make up more than 85% of their diet. Thus, monitoring the distribution and availability of key gorilla food species is very important for gorilla conservation.  This is where long-term data are really important—we have been able to show that plant distributions have changed over the last 20-30 years.  For example, gallium, which is one of the gorillas’ favorite foods, has decreased in availability since the 1980s.  We now need further studies to understand what is causing this change.

Adult male mountain gorillas don’t know which infant is theirs, but they spend time caring for and socializing with older infants. One famous example is the silverback Cantsbee, who was known to “babysit” five or six infants while their mothers were foraging. Research has also shown that blackback (immature) mountain gorilla males who spend more time playing with infants and juveniles are more likely to sire offspring once they become silverbacks.

On the social interaction scale, gorillas score pretty low.  Unlike chimpanzees, who embrace, hold hands and even kiss, gorillas are much more socially reserved.  Thus, an important tool to help us understand underlying social relationships is proximity patterns—who is sitting near whom.  We can create networks of social relationships simply by looking at how gorillas distribute themselves, especially during rest periods. Amazingly, by looking at their proximity patterns, researchers can also see reconciliation between individuals!  One study found that after a fight, gorillas were more likely to sit near their former opponent, likely as a way to reestablish their social bond.

As Titus matured in his bachelor group, he gradually challenged the dominant silverback, Beetsme, for leadership. At age 17 he finally succeeded in taking over. Interestingly, he allowed Beetsme to remain as an assistant, helping to protect the group, until Beetsme’s death in 2001. This challenged the assumptions previously held by primatologists that male gorillas could not form a group together, and that a dominant male would have to leave his group after being usurped by a younger male.

To build their nests, gorillas use  different vegetation including leaves, parts of bushes and branches to  form layers of bedding into a circular  nest. Nest building usually takes around 5 minutes. Mountain gorillas are typically seen building their nests on the ground, however some individuals may choose to rest in an elevated nest.  Because these nests are constructed to sleep in  overnight,gorillas aren’t usually seen to build them during their midday siestas.

Episode 17, Public’s Questions #4: What is the daily life of a gorilla like?

On a typical day, gorillas don’t actually do very much! The majority of a gorilla’s day will consist of resting, traveling, and foraging . On average, they only move about one mile per day, so even traveling doesn’t involve too much activity. Resting, traveling, and foraging  combined make up around 95% of the gorilla’s day. The other part of their day may be spent participating in social behaviors such as playing or grooming.

Like most primates, gorillas have opposable thumbs on their hands. But did you know that they also have semi-opposable feet? Their big toe is longer and placed lower on the foot than human big toes are. Gorilla big toes are also very flexible, which helps with the grasping and climbing behaviors that are so integral to daily gorilla life (Tocheri et. al., 2011). Humans, on the other hand, have shorter, forward facing big toes which provide pushing power for walking, rather than grasping ability (Rolian et. al., 2009).

Episode 32, Valentine’s Day: Proximity patterns give us an inside look at their social lives

Gorillas have a unique social structure in which both sexes tend to leave their family group once they reach maturity. This opposes other ape species, like the chimpanzee and bonobo that have large fission fusion groups, and orangutans with their semi-solitary lifestyles. Because gorillas leave their natal groups, there aren’t many of the super close bonding behaviors, including embraces and kisses, that you might see out of chimpanzees and bonobos. Instead, researchers look at proximity to determine social bonds. Gorillas tend to spend their time closer to the individuals they like and further away from the individuals that they don’t. Due to this, behaviors like one gorilla moving away when another gorilla comes close gives us clues into their social lives. By looking at their proximity patterns, researchers can also see reconciliation between individuals! This means that after a fight, we are more likely to see the individuals sitting next to each other as a way to restrengthen their bond.

You may see pictures of baby primates, especially gorillas and think “how cute! I would love one as a pet!” But gorillas and other primates make AWFUL pets for a whole host of reasons!  Most are stronger than the average human with sharp teeth and can easily inflict injury.  They can be difficult to care for, requiring specialized diets.  They have habits you likely don’t want in your house—urine washing to mark territory comes to mind.  As they depend on their social groups to thrive, primates who are isolated from peers often become psychologically damaged.

Female mountain gorillas typically spend their entire lives in groups, relying on a silverback to provide general protection to the group, primarily from other gorilla males who often target infants when they interact with a group. If for some reason the group disbands, usually after the death of the silverback, females will transfer into another group. But mountain gorilla mother Pasika surprised us a few years ago. After her group disbanded, she traveled alone with her 1-year-old infant, Mashami. We assume this was to protect him, as given his age, if she had transferred into the group, the dominant male would likely have killed Mashami so that Pasika would have started cycling again. After 7 months of being solitary, Pasika was found in the company of lone silverback Turatsinze, and unfortunately without her infant. While Mashami did not survive, it is amazing to see what Pasika did for her infant and is something we have only seen once in the Fossey Fund’s 50-year history.

Just like humans, every gorilla has a different personality! Generally, young gorillas are energetic and playful, but as they mature, they usually calm down and spend less time playing. However, you may still see adults engaging in play! Overall, gorillas are gentle, curious, and quite shy.

Silverbacks may have historically been thought of as just the protector, but they fill many roles within the group.  They lead daily travel and activities, keep the group cohesive and peaceful, defend the group from outside male intruders.

But just like human dads, gorilla dads know how to have a little fun with their little ones.  They are incredibly patient, often acting as jungle gyms for infants who lay on and roll off their backs.  On more than one occasion we have seen Mafunzo babysitting and playing with up to six infants and silverback Isabukuru was a favorite among our staff for his love of hanging out with the youngsters in his group. 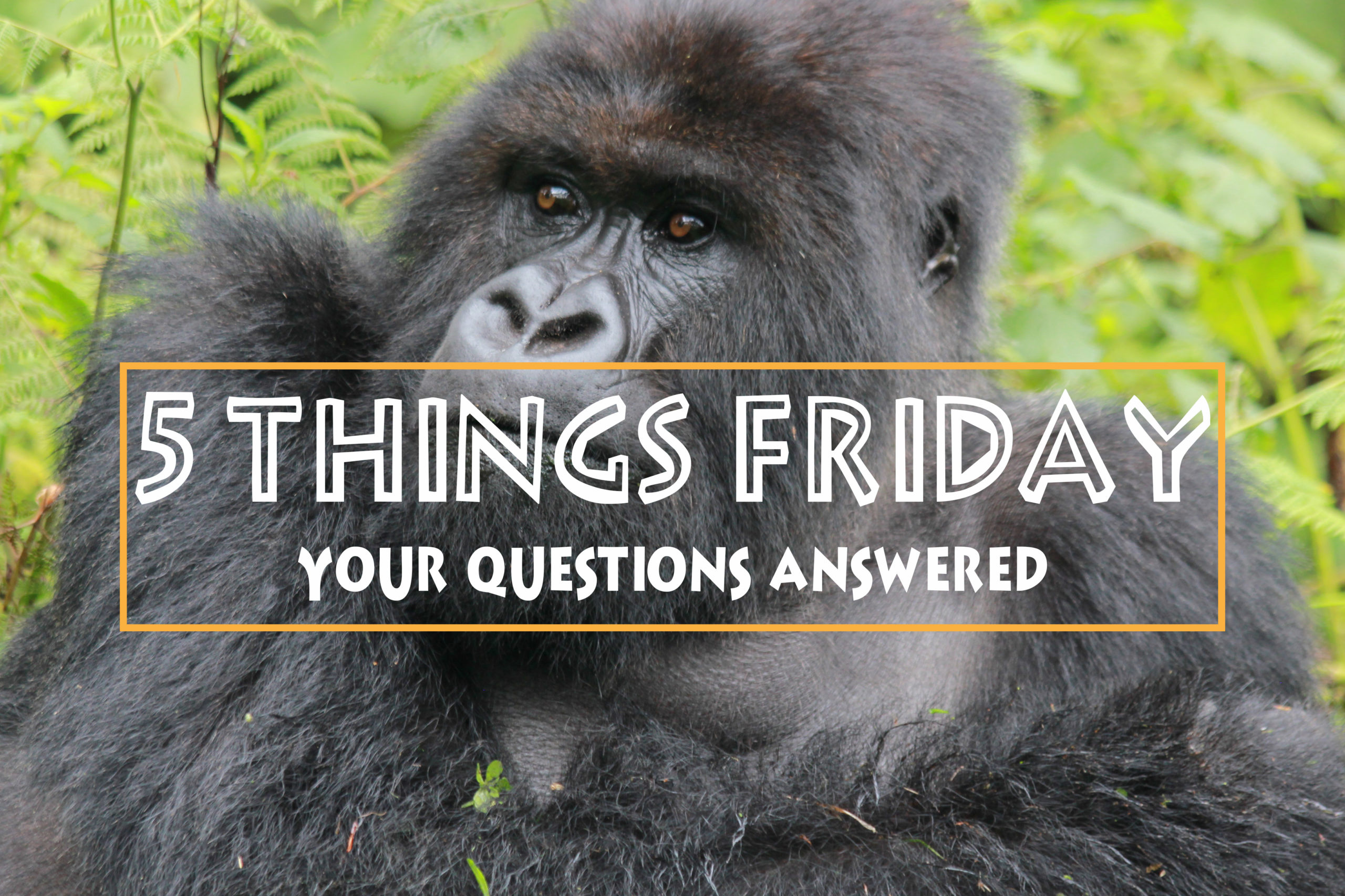 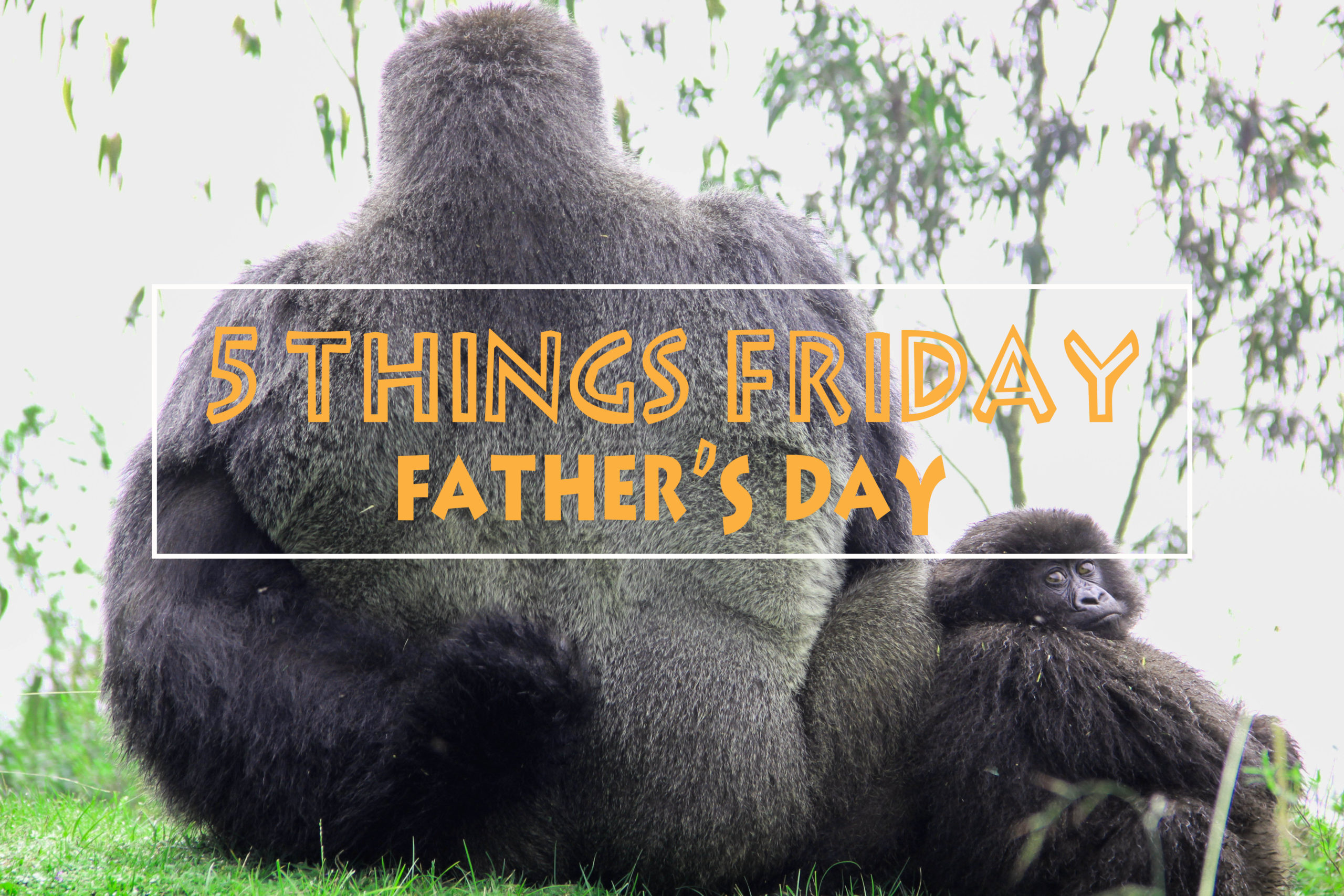