“A life changing experience!” This is what most tourists say after they visit the mountain gorillas in Rwanda, and Fossey Fund staff totally agree, since they spend every single day with gorillas — each day is exciting and new discoveries happen all the time.

Mountain gorillas are a unique species, with complex personalities and behaviors, as well as interesting social structures. Our researchers take detailed notes about what they see among the gorillas each day, just as Dian Fossey used to do. And now we have a 50-year database of such information!

Here are some of the details about the wonderful experience of seeing the mountain gorillas of Rwanda:

Getting ready to see the gorillas

The walk that tourists take to get to the gorillas is an experience in itself, as it brings you to one of the most beautiful places on earth. This is one of the few remaining tropical mountain forests, located on the steep slopes of the Virunga volcanoes. Gorilla groups are spread out everywhere among the five volcanic mountains (Karisimbi, Bisoke, Sabyinyo, Gahinga, Muhabura), so depending on which group you are going to visit your itinerary will differ. The walk to reach a gorilla group can take from one to several hours, but no matter how long it is, the end result is always amazing. 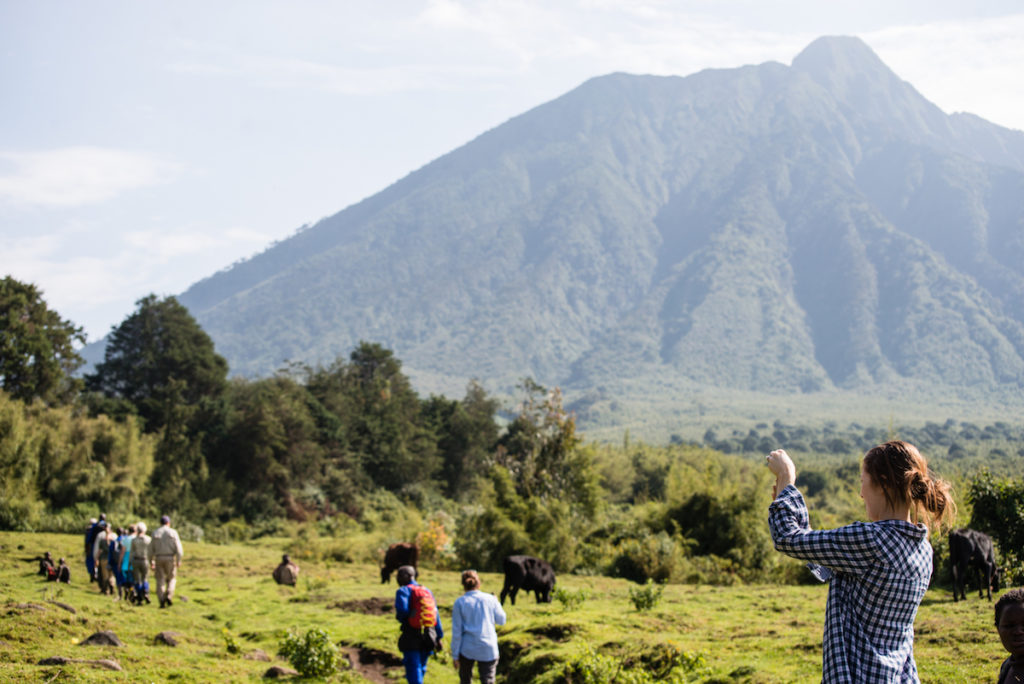 Expert gorilla trackers always lead the way, as they detect and follow gorilla traces from the last spot where the designated gorilla group was seen. These traces can include hand and foot prints, bent vegetation, remains of plants the gorillas have eaten and other signs. Every small detail is investigated, as the trackers determine the gorillas’ direction.

It’s not possible to predict how far the gorillas have moved from the previous day, or what direction they’ve taken, so patience is definitely a good state of mind while following trackers at this time. But sooner or later, they will find the group they are seeking.

The first sight of gorillas is unforgettable! Inside the intense green of the dense vegetation, you’ll see dark shapes as you go closer. It takes a few seconds to realize that these shapes are wild gorillas, right there in front of you. Amazingly, they are perfectly calm. The gorillas may glance at you at first, but will quickly resume their normal activities. 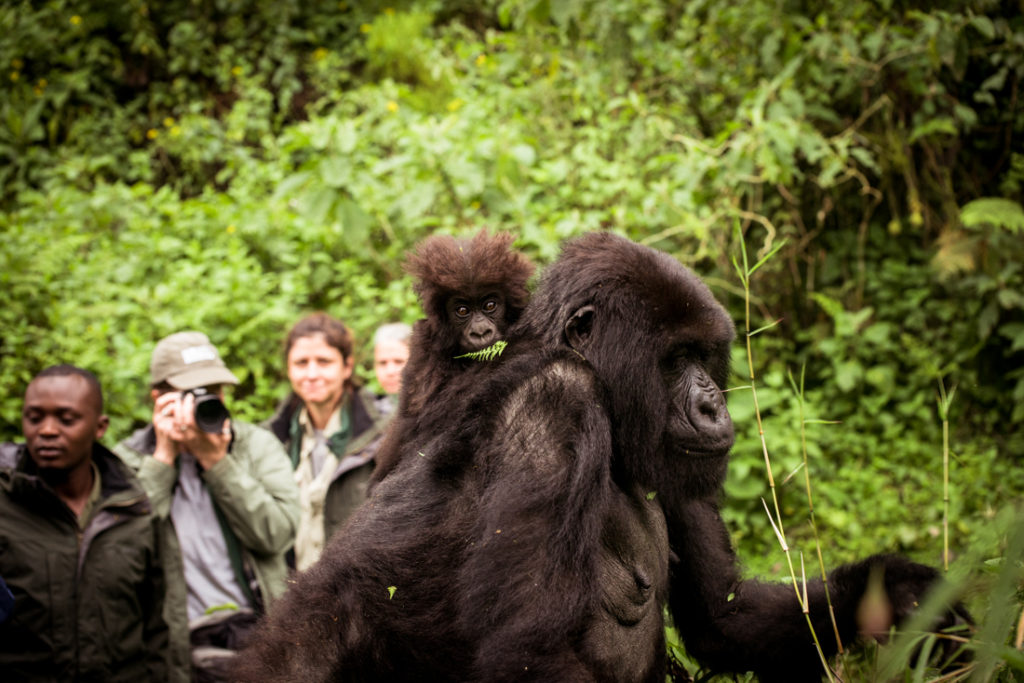 You will be impressed by the huge size of the adult male gorillas (reaching up to 400 pounds). They are called silverbacks because of the gray color of the hair on their backs. You will notice that the adult females are much smaller and do not have gray backs.

TIP 1: If you happen to look into the eyes of a gorilla, take a quick moment to fully enjoy the experience, but then immediately take your gaze off the gorilla’s eyes and look down. This signals to the gorilla that you are not a threat and that everyone can relax.

These gorillas are habituated to the presence of humans, which means that they tolerate us without modifying their behaviors, seeing us as a neutral part of their environment. However, in order to maintain this peaceful setting, there are rules for humans to follow. 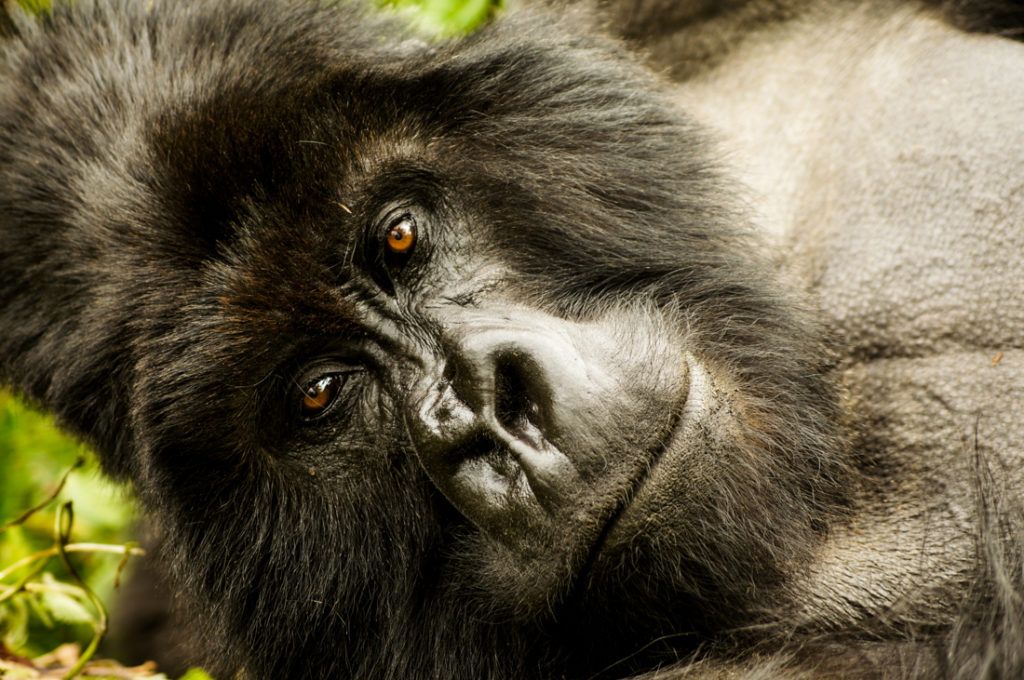 TIP 2: Humans are asked to keep a safe distance of 7 meters (about 23 feet) away from the gorillas. This also prevents spreading any human diseases to the gorillas. If a gorilla moves closer to you, you stay still and let him pass by. If you happen to be standing exactly where a gorilla wants to be, just give him the space and let him move as he likes. If the gorilla approaches you and then sits down, you should slowly move away to resume the 7-meter distance. But don’t worry if you aren’t sure about what to do: Your tracker guides will be watching closely and will instruct you as to the best way to move. 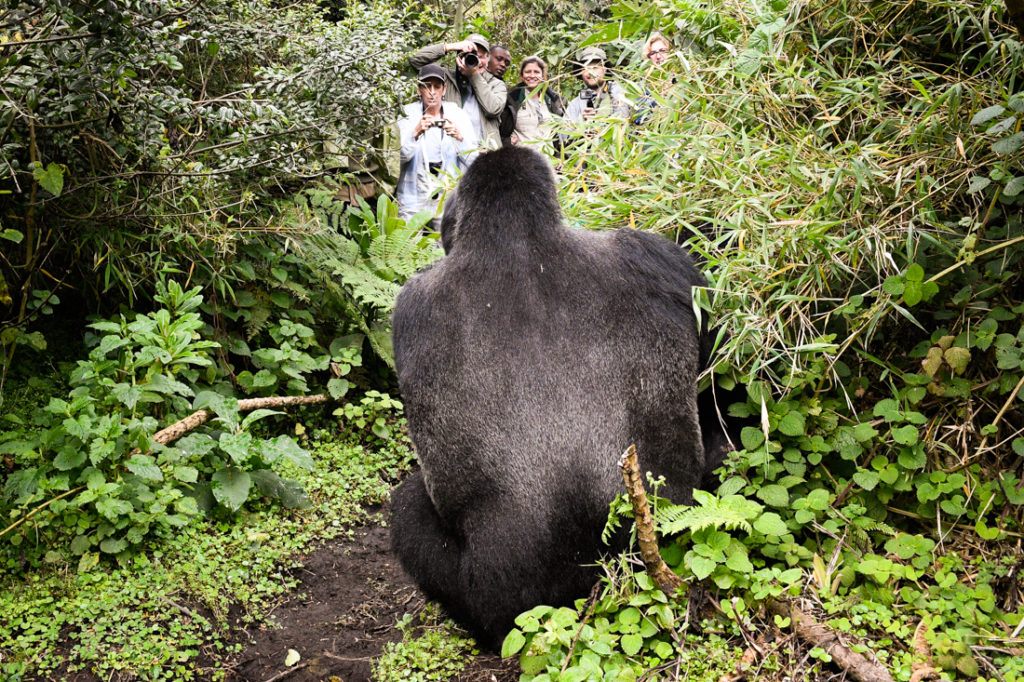 What the gorillas do: Eating, resting, playing

One of the most fascinating things to watch is the gorillas eating. They will be spread out for this, so as to maximize accessibility of the plants they are eating. It’s amazing to watch their meticulous manipulation of the food plants before they eat them. The gorillas’ diet consists almost entirely of plants, including leaves, stems, shoots, roots, flowers, and fruits. On rare occasions they may eat ants. To get the nutrition they need, they have to eat up to 40 to 80 pounds of veggies a day!

Sometime some gorillas may gather closer together while eating and often this is preceded by “pig grunt” sounds made by the feeding gorilla toward the individual approaching him or her. The pig grunt expresses the authority of the feeding gorilla with regard to the food spot.

Pig grunts are among the many vocalizations that you may hear while you are with gorillas. This particular vocalization is a mildly antagonistic one, often used to reinforce dominance hierarchies. It is rare for pig grunts to be addressed toward humans but if this happens, don’t worry! Just stay calm and be still. If the gorilla in question clearly wants to reach food in the spot where you are standing, avoid eye contact and gently move away.

Feeding periods can last a long time. Afterward, it’s normally time for a break, when the gorillas will rest. This is the best time to observe social interactions, because the gorillas will gather together more closely. We learn a lot during resting times, by seeing who stays near whom, which gorillas are in physical contact, and who is closest to the dominant male. These subtle behaviors give us big clues into the relationships between individual gorillas. 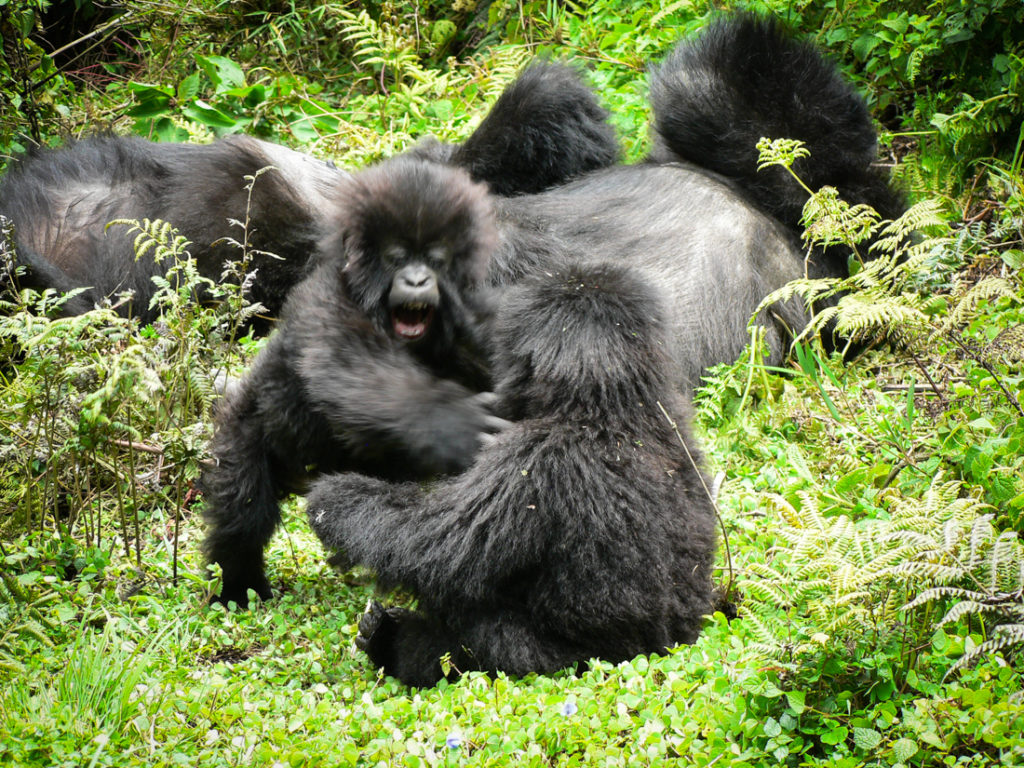 While the adults rest, youngsters often engage in play by chasing and tickling each other, although sometimes the playing resembles a wrestling match too. Gorillas even make “play vocalizations,” which sound similar to human laughter! Playing is actually fairly hard work, so the gorillas will also take breaks from play, to recover their energy. Play is important training for development of young gorillas, just like in humans. Although play is more frequent among youngsters, gorillas of all ages can engage in play behaviors.


Gorillas communicate in various ways, including vocalizations, body postures and specific actions. For example, if a gorilla displaces another gorilla from a resting or feeding spot, that means that he is the more dominant one. Researchers record such displacements and use the information to figure out the hierarchy among the males and understand the behaviors in the group.

Gorillas also commonly groom each other. This is a gentle gesture that involves cleaning of the hair to remove dust, leaves and dirt. Observing a mother carefully grooming her infant is one of the most precious moments remembered by many gorilla visitors.

During the resting time while gorillas sleep, relax, play and groom, you can often hear them making “belch” vocalizations, which are guttural sounds that mean “all is well.” When a dominant silverback makes a belch sound, the other gorillas will reply. Gorillas may also make belching sounds when they are enjoying a particularly delicious food, which can escalate into a chorus of several gorillas belching at different pitches, almost like singing! Trackers and guides often imitate the belch sound, to signal their arrival in a peaceful way.

The dominant silverback is normally the first one to end the resting session and will then set the group’s next destination. As soon as he decides to move, all the gorillas follow him in a line, with the more dominant ones in the front, as they move to the next feeding area. If you see a gorilla group move from a resting session, you will be amazed at how quickly they can vanish into the forest.

Not all gorilla behaviors are peaceful, however. Antagonistic behaviors are also observed, often when they meet another group or a solitary male. Interactions often start with the males displaying through cheats beat, hooting vocalizations, hitting the ground, or smashing plants. While displaying, gorilla males assume a strut stance posture, with straight tight limbs, arched backs, and heads moving side to side. Displays and strut stance postures are made to impress the opponent, and most of the time the interaction will resolve without an actual physical fight. Displays are also made in within a group, such as when a male wants to show off to females! 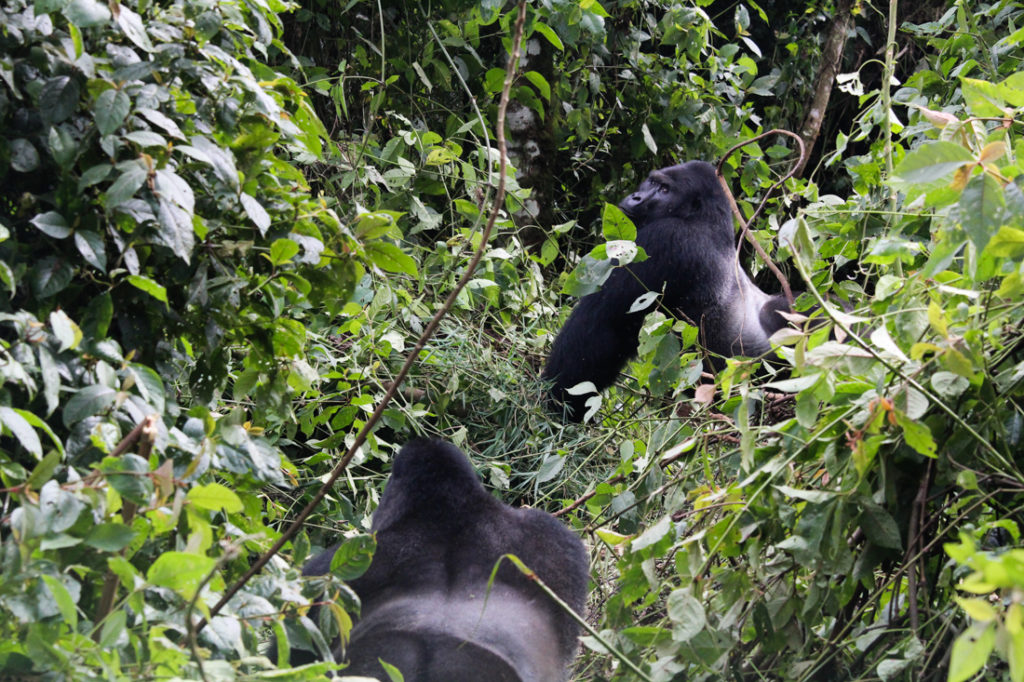 Spending time with mountain gorillas is truly one of the most memorable wildlife experiences on earth.  Being in and amongst a gorilla family is sure to create memories and impressions that you will never forget. With only 880 mountain gorillas remaining, it is also important for tourists to remember their own behavior when they are with the gorillas, to minimize any potential risk to the gorillas. This means maintaining the required distance, coughing into your arm, and avoiding spitting or eating in the forest.

For further information on responsible ecotourism and to learn more about visiting the gorillas, click here.