After finishing her book, “Gorillas in the Mist” and working at Cornell University as a visiting associate professor, Dian Fossey returned to Rwanda in 1985 to continue her pioneering work studying and protecting the mountain gorillas she had come to know and love so well over two decades in Africa. 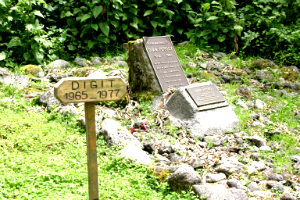 She had not been back long when, on Dec. 26, 1985, she was murdered in her cabin at the Karisoke Research Center. She was 53 years old. Fossey was buried in the gorilla “graveyard” where some of the gorillas she befriended were also buried.

Although she became a controversial figure for some of her actions, there is no doubt that Fossey was the leading authority on the behavior of mountain gorillas and that her work has lived on. The Dian Fossey Gorilla Fund has carried on her protection and monitoring work and as a result of all such efforts the Virunga mountain gorilla population is now the only ape whose numbers are increasing, having risen from about 250 when Fossey died to about 480 now.

"When you realize the value of all life, you dwell less on what is past and concentrate more on the preservation of the future.” Dian Fossey