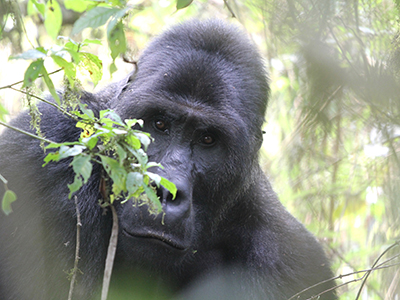 After decades of extreme survival pressure, the conservation status of Grauer’s gorillas, found only in the Democratic Republic of Congo, has just been officially raised to the highest threat level – critically endangered – by the International Union for Conservation of Nature.

“The Dian Fossey Gorilla Fund collaborated with an international team to recommend this reassessment,” says Dr. Tara Stoinski, president and CEO/Chief scientific officer. “This change in status confirms what we already know from our work on the ground in the core of Grauer’s gorilla range – their situation is dire and they are headed toward extinction.”

The Fossey Fund has a permanent field station in the core range of the Grauer’s gorilla, and now has four teams of trackers protecting them on a daily basis, with a fifth team in development. Other than separate populations protected by the Congolese wildlife authorities (ICCN) in two national parks, this is one of the only locations where Grauer's gorillas are receiving daily, direct protection.

Grauer’s gorillas (formerly known as eastern lowland gorillas) are found only in the Democratic Republic of Congo, and were already listed by IUCN as one of the world’s 25 most-endangered primates. Their current numbers are uncertain (around 3,800 by some estimates), but it is clear that they have faced a rapid decline in the past 20 years, possibly up to 80 percent. “If the current rate of decline continues,” says Dr. Stoinski, “Grauer’s gorillas will be extinct in as few as five years.”

Although the Fossey Fund has worked since 2001 to help designate community-managed forests in this part of Congo, it became clear that the Grauer’s gorillas urgently required direct protection as well, as the Fossey Fund has successfully provided for critically endangered mountain gorillas in nearby Rwanda for nearly 50 years. Illegal mining, deforestation, and hunting in Congo were known to have increased as a result of the civil conflicts, decimating crucial forests that hold some of the world’s richest biodiversity, including the Grauer’s gorillas.

“Most of the remaining Grauer’s gorillas live outside of protected areas,” says Dr. Damien Caillaud, the Fossey Fund’s research director for Congo programs and one of the authors on the Grauer’s current assessment. “And they are extremely sensitive to areas where poaching occurs. They won’t be found within a 5-8 kilometer range around mining camps, for example, so each such camp leads to gorillas leaving an area of some 30-50 square kilometers of forest. And there are many, many mining camps in the eastern Congo forest.”

So, in 2012-13, working with traditional landowners from Nkuba in the Walikale territory village, Fossey Fund staff intensively surveyed a pristine forest area to analyze the status of Grauer’s gorillas and other large mammals in the region. At least 100-150 gorillas were located in one forest block, and the presence of additional gorillas was documented recently in a contiguous forest.

The Fossey Fund is now monitoring and studying these Grauer’s gorillas daily, which provides critical protection as well as data needed to develop effective conservation strategies. The long-term goal is to double the number of Grauer’s gorillas receiving such protection over the next 3-5 years, which would cover about 10 percent of the entire remaining population. 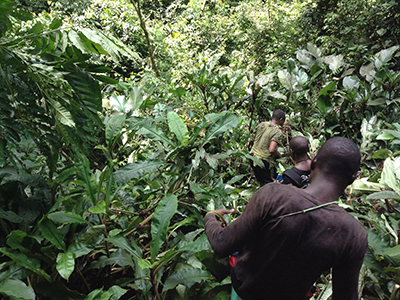 A key feature of the Fossey Fund’s work in protecting Grauer’s gorillas in Congo is the involvement of local communities, especially traditional landowners. Field staff are hired from local villages, food supplies are bought from local crops, and community development efforts are underway, such as small-scale sustainable farm projects to help decrease malnutrition and bushmeat hunting, and support for youth education.

“The Fossey Fund hopes that this multi-faceted model will build the basis for conservation action that can be applied throughout the range of Grauer’s gorillas, encouraging local groups to protect forests directly,” says Urbain Ngobobo, head of the group’s Congo programs. “We are frequently approached by other communities who want to protect their forests in this way,” he says. “This is a region that has dire poverty, insecurity, minimal education opportunities, illegal mining and other issues. So protecting Grauer’s gorillas through local community involvement provides jobs and opportunities for people, in addition to protecting gorillas and other wildlife,” says Ngobobo.

“The conservation model the Fossey Fund has established in the past four years — working with traditional landowners to survey and protect extended areas of the forest — is very successful. If we can create more sites such as the Nkuba-Biruwe research and conservation station, we can stop the decline of Grauer’s gorillas,” says Dr. Caillaud.

The Dian Fossey Gorilla Fund works with other nonprofit organizations collaborating in the Conservation Action Plan (CAP) for protection biodiversity in DR Congo. CAP is coordinated by the Jane Goodall Institute, with support from the Arcus Foundation. The Fossey Fund also works in conjunction with Congolese wildlife authorities (ICCN/Institut Congolais pour la Conservation de la Nature) and other international partners. The Fossey Fund’s work with Grauer’s gorillas is supported by the Turner Foundation, U.S. Fish & Wildlife Service, and other donors.