One of the main challenges in ape conservation in many parts of Africa, and particularly where the Fossey Fund works in eastern Democratic Republic of Congo, is the hunting of gorillas and chimpanzees. Adult animals are killed for food and the infants are kept as pets or sold into the pet trade. Because of our daily presence in the forest and outreach work with local communities, we are often the first people approached when an infant ape is discovered.

In late June, our Congo program director, Urbain Ngobobo, received information from a local conservationist that an infant chimpanzee was being held in a remote village in one of the regions where we work in Congo. Our staff then formed a team to plan a strategy for rescuing the chimp, which had apparently been caught in snares in the forest and brought by hunters to the village. 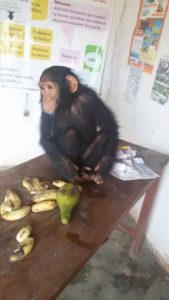 It was reported that the hunters had been influenced by recent conservation activities in the area, as well as efforts to provide alternative food opportunities (as opposed to hunting for bushmeat), and therefore decided to turn the young chimp over to conservationists for care. Fossey Fund staff organized transportation, food, water and care for the chimp, coordinating with local national park authorities (ICCN) as well as Gorilla Doctors, and the animal was brought safely to the Lwiro Primate Sanctuary (Centre de Rehabilitation des Primates Lwiro) in the south Kivu area.

When a rescued chimp arrives in this sanctuary, it is the custom to name the animal after the village it came from or the person who rescued it. In this case, the chimp reecived the name of “Wenga Lipanda.”  “Wenga” is the name of the village where the chimp was located and “lipanda” is a word for “independence,” chosen since the rescue took place on the independence day celebrated by the Democratic Republic of Congo.

The chimp had a small wound on its hand but seemed otherwise healthy, and was estimated to be about 3 years old. We hope he will be successfully integrated with other rescued animals at the sanctuary.