The Dian Fossey Gorilla Fund has completed a wildlife survey of an area of Maiko National Park in the Democratic Republic of Congo that was thought to house as few as 15 Grauer’s gorillas, and has found evidence of more groups than predicted. Grauer’s gorillas are critically endangered and their population has plummeted in recent decades, possibly as much as 80 percent, with only a few thousand animals left.

The Fossey Fund works to protect Grauer’s gorillas in a core area of their range outside national parks, by working with local communities and traditional landowners, and training local people to become gorilla trackers, with five teams now working regularly from a permanent base north of the town of Walikale. 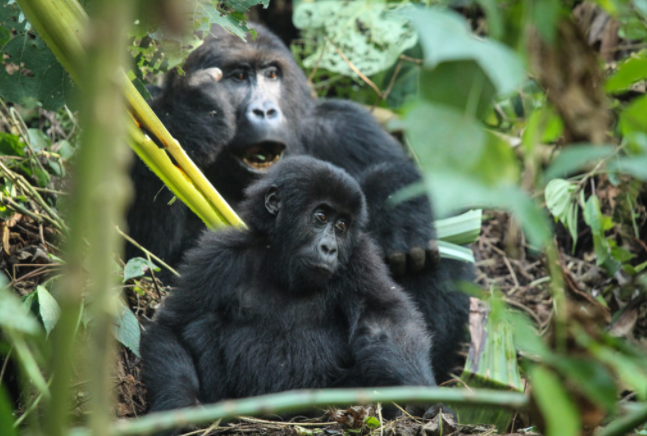 Maiko National Park is one of only two formally protected areas within the Grauer’s gorilla range, making it critical that conservationists understand the status of the gorillas and other wildlife that are left there and need protection.  However, Maiko had not been surveyed for gorillas for many years, primarily as a result of security challenges in the region and the difficult terrain.

“Maiko is a huge park — more than 10,000 square kilometers — and so is critical to the future conservation of Grauer’s gorillas and many other species of wildlife,” says Dr. Damien Caillaud, Fossey Fund research director for Congo. “Recent reports suggested as few as 15 gorillas remained, which if true would make it harder to raise conservation dollars to protect the park.  We hoped that if we looked for more gorillas there, we might find them. And we did.”

Collaborating with local communities and authorities

A team of nine Fossey Fund field staff, as well as monitoring officers from Maiko/ICCN walked for several weeks in extremely difficult terrain, measuring signs of gorillas along pre-determined transects. They found good, fresh signs of the presence of gorillas, such as night nests, foot prints and food remains, suggesting there are two to three Grauer’s gorilla groups just in this area, says Dr. Caillaud, representing at least 30 gorillas.

Also found were signs of chimpanzees, okapi, buffalo, duikers, giant pangolin, monkeys and other important wildlife, as well as evidence of poachers and mining activity.

“A few years ago, it was unimaginable that the community surrounding southern Maiko could make a joint patrol with ICCN,” says the Fossey Fund’s director of Congo programs, Urbain Ngobobo. “The survey we did was a strong signal showing that we can count on the community to save the remaining extremely endangered Grauer’s gorillas both inside the national parks and in the community forests.”

“We surveyed less than 1 percent of the park and found evidence that more gorillas exist there than has been recently suggested,” says Dr. Tara Stoinski, Fossey Fund president and CEO/chief scientist. “This is very exciting news and really demonstrates the needs for more surveys to fully understand how many gorillas remain as well as more conservation support for the park.”